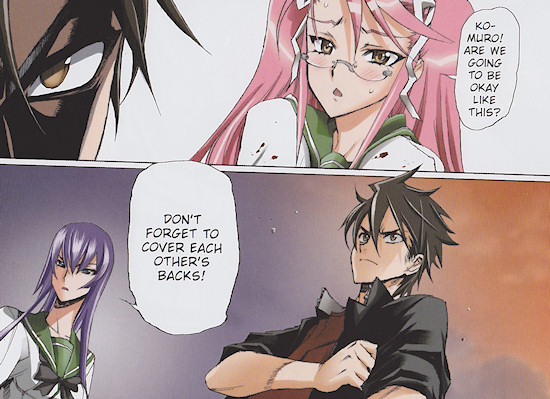 Highschool of the Dead Omnibus Edition 1

By now, I would assume that most of us are pretty much used to the typical manga format - page sizes may differ, but for the most part we expect to find occasional full-colour pages and inserts within an otherwise black and white manga format.  But hey, wouldn't it be a huge treat to read a manga series in full colour?  Enter this Highschool of the Dead Omnibus edition to fulfil that dream.

As its name may suggest, this omnibus release takes the first four volumes of Daisuke Sato and Shouji Sato's Highschool of the Dead manga, and bundles them into a single release.  That isn't the half of it however, as this edition also features bigger pages, lots of additional artwork, character and weapon descriptions and, above all else, every single page is lovingly produced in full-colour.

Put quite simply, everything about this Omnibus Edition is glorious, and kudos has to go to Yen Press for their efforts here.  Simply from looking at the cover you know you're in for a treat, with its embossed titles and colourful images, and the extent of this labour of love truly becomes clear when you notice the additional artwork hidden away both underneath and within the reverse of this slip cover (although you might have trouble explaining the inner cover image to your parents!).  With glossy pages throughout, the quality of the book shines through from beginning to end - it's a good job they're glossy too, as you might be tempted to shed a tear of joy as you flick through it.

I have to confess, I had my reservations as to how Highschool of the Dead would look in full-colour - its original black and white editions look good but still aren't exactly the pinnacle of the art form, critically speaking.  However, most of these reservations were blown away by the time I'd finished perusing this edition - for the most part the combination of larger pages and full colour really brings out the best of the manga's artwork in all its bloody, gory and sexy glory.  Okay, the colouring or look of certain frames might arguably look a little "off" for one reason or another, but for the most part these collected volumes are a joy for the eyes to soak in - it's the kind of purchase you'll be tempted to look through every now and again even once its story has grown old.

Speaking of its story, we've already covered volumes one, two, three and four of Highschool of the Dead in isolation via their original releases, so there isn't much new to say here - its take on the zombie horror genre is broadly a slick one that combines shocking violence and fan service surprisingly well for the most part, even if things drop off a little once the series actually leaves its high school setting on goes on the move through the zombie-infested remains of Tokyo.  Here is a series that knows that it's trampling over a surfeit of zombie horror clichés with an arsenal of lovingly-detailed and recreated weaponry and it simply doesn't care, which makes for a fun romp for the most part.

It probably goes without saying that this Omnibus Edition will largely appeal to existing fans of the Highschool of the Dead franchise, although its price point is such that it could well tempt in new readers as well with its promise of high quality, full-colour breasts and brains as it straddles the line between being expensive as a single entity while stacking up quite well price-wise compared to buying all of the individual volumes.

Certainly, this is now the definitive way to read the series, and it's great to see it get an English language release at all, not least one as carefully compiled and packaged as this.  Even as someone who has been reading and collecting the series' initial releases, as soon as I laid eye on this edition in the flesh I knew I couldn't resist picking it up, and personally I'd say that it's worth every penny.

9
It may not be the most highbrow or incredible of series, but if you're a fan of Highschool of the Dead then this Omnibus Edition is simply perfect in every way, and a joy to read and behold.
COMMENT AND DISCUSS
blog comments powered by Disqus