Anime Limited to stream Samurai Flamenco in the UK 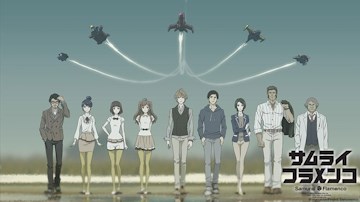 Anime Limited to stream Samurai Flamenco in the UK


After yesterday's announcement of Anime Limited's partnership with new streaming service Wakanim and their acquisition of Kill La Kill for streaming to the UK this autumn (the first episode of which is now available), today we have some exclusive news of our own from the distributor for your delectation!

Very good news it is too, as we can confirm that Samurai Flamenco will be streaming to the UK courtesy of Anime Limited - the first episode of the series should go live on the All The Anime simulcast page on Thursday, October 10th from around 6:30PM, with future episodes going live on the new service's official page once that service goes live.

The series is also the first to be fully approved to appear on Wakanim's UK download-to-own and download-to-rent service once that goes live over the coming weeks.

Animated by Manglobe and directed by Takahiro Omori, the series - which airs in Japan on Fuji Television's noitaminA slot this autumn - tells the story of a man with no superpowers or talent who decides to become a lone superhero, and his relationship with a policeman who discovers said hero's true identity on account of this hero causing him no end of headaches.

If you'd like to know a little more about the directorial career of Takahiro Omori and why his presence alone makes the series noteworthy, check out this short article we've prepared to guide you through the seminal works he's had a hand in thus far.