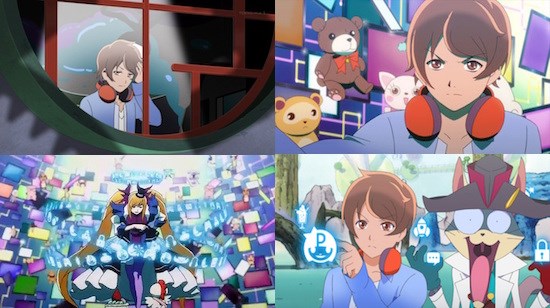 Dreams are odd things: They can terrify, excite or confuse in the moment, then be forgotten the second you wake up. All of which can be applied to what I've seen of Studio Gonzo's latest offering, the oddly titled 18if. We find ourselves following one Haruto Tsukishiro as he wakes up in a surreal dream world, occupied by seemingly all powerful, and sometimes malevolent witches. He has no idea how he got there, or how to get back to the real world. Quickly picking up the help of Katsumi (an anthropomorphic cat) and Lily (a ghostly girl only he can see), Haruto finds himself pulled into each of the witches own worlds as he attempts to help/fight them - all this while trying to find a way home.

If the above synopsis seems overly familiar, or a little confusing, it’s because both of those things are true of this show. The dream world we are introduced to is simply presented as existing, with no one really interested in working it out or explaining what it is. The presence of the witches is explained as them being victims of a sickness called sleeping beauty syndrome. This leaves them in the bizarre dream world, which they can manipulate and alter to their own desires. The familiar part starts when you look at the ideas used in the series, and what appears to be a habit of shamelessly imitating and referencing other, better, shows. By about ten minutes into the first episode I had noted nods to 24, Twin Peaks, Studio Ghilbli (nice to see The Baron getting more work after all these years), and Jurassic Park. Not to mention the ‘stuck in an strange place you can't escape from’ plot is essentially a spin on the likes of Log Horizon, SAO and Overlord, while the ‘one man helping a revolving door of beautiful women’ scenario has been seen in far too many shows to list.

In terms of tone the series is all over the place, all three of these opening episodes have their own look and feel. While ambitious, and mostly well executed, this can be jarring and makes me wonder who the intended audience is. So far we’ve had: A candy coloured anime for all ages, a dark and violent revenge thriller, and a bitter-sweet love story to round out the trio. If this trend continues I fully expect Haruto to be powering up a mecha come the climax of the series. The second episode also contains lots of very graphic violence and references to some pretty dark themes, which surprised me after the cartoonishness and relative lightness of the first episode.

That said, the three opening episodes all had the same basic plot: Haruto meets witch, witch has some issue that she needs resolved, Haruto helps her do this. The real issue here is the rushed pace of the episodes, with a new witch each week this leaves very little time to get to know them and even less time to resolve what appear to be complex issues.

This now touches on another rough area of this series: The cast. Two of them have had very little screen time so far, but to sum up: Katsumi has a secret tied to what appears to be the ongoing arc of the series, and spouts exposition, Lily calls Haruto brother and… well that's about it. However, the biggest issue is with our main character and the fact that the writers seem to have settled on him being staggeringly laid back about everything, except when he's not. Across three episodes he manages to be an inspiring presence, a cold blooded killer, and a romantic lead. When not filling whatever hole the writers want to jam him into he sleepwalks around, not bothered by the weirdness surrounding him - oddly, however, this fits with the tone of the rest of the show. Outside of these three we have a new witch each episode, only one of whom makes any real impact. Not helping any of them is the fact they all fall in love with our hero, sometimes after knowing him for barely a few minutes.

The animation is possibly the strongest aspect of the series. The character designs are unique, and the dream world is magnificently realised. It ranges from a surreal delight to a nightmarish hell scape, depending on which witch is in control. This isn't quiet enough to make up for the other flaws of the series, but it helps immensely in terms of eye-candy.

A lot of the above is obviously not complimenting this series but, perhaps strangely, I still want to know what happens next. The individual episodes each work on their own despite the breakneck pace, and the hints of the ongoing plot are intriguing. When all of the above is jammed together the series actually kind of works, despite feeling like it should fall apart. Perhaps the best thing I can say is that this show is weird enough to give a try, and you may just find yourself caught up in the oddness of it all.

6
Weird, messy and intriguing. Worth a look for lovers of mystery and surrealism
LATEST REVIEWS