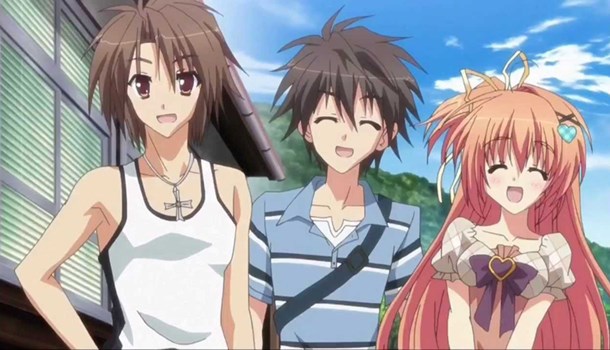 I went in to the show utterly blind, not knowing anything of the show whatsoever before I fired up the Crunchyroll page. Within two minutes I was sure that the show was a direct port of a date-a-lass (aka adult bishoujo) game and a quick Wikipedia check proved me right. While this is not a bad thing in itself, Hoshizora feels like an astonishingly low-effort adaptation of material that isn't exactly original or outstanding in its own right. Lets play spot the cliche:

Blank slate protagonist Kazuma Hoshino moves to a new town with his sickly androgynous younger sibling due to said younger sibling's bad health. Their parents are referenced but not present. The protagonist is no stranger to the area, having visited when he was young and at that time met a girl and they promised to be friends forever. The protagonist gets separated from his brother and then meets a young girl who he kisses in a clumsy accident. Another girl sees them, misunderstands the situation, and calls him a pervert. After all that the protagonist and his sibling move in to an obscenely sized house. Upon attending school the next day, the protagonist is - shock, horror - in the same class as the girl he kissed and the other girl who now thinks he is a molester. How wacky. Protagonist is then slowly introduced to the entire cast of heroines and events slowly unfold in a plodding linear fashion, interspersed with ominous flashbacks.

Every last part of the show's premise is shallow, bland and, perhaps more importantly, done better in other series. Unless this is your first romantic anime experience, every event that transpires feels hackneyed and can be easily predicted in advance. This isn’t helped by the fact that the show moves at a snail's pace, with every scene feeling like it had been padded out so they can fill more time in an episode. Hoshizora also makes a few attempts at humour to lighten the mood, but the slow pacing and sheer predictability of the jokes leaves them dead in the water.

As a romance show, you would think that the most important part of the series would be the characters. Sadly, all of the characters in the show feel fake and have the approximate depth of a puddle, with no real weight behind them that would make them feel relatable or anything like a human being. Every member of the cast is a vague collection of tropes and traits precisely designed to tug at the viewers heart strings; a tactic that sadly falls flat if you are already sick of this kind of checklist-based character design. There are two notable exceptions to this - the main character is so monstrously bland and oblivious that it beggars belief. While this is nothing new as this character is primarily designed to be the audience self-insert, Kazuma is so non-existent that it is almost mind-boggling. The other exception is Daigo, Kazuma’s male classmate and the person who fills in the role of “male visual novel protagonist’s chum”, which he does very well and his antics managed to get a few laughs out of me.

The presentation of the show can also be a mixed bag - the majority of the character art is well done, even if it has a woefully predictable habit of focusing a little too intently on the female characters. This is spoilt by some terrible sound design - all of the sound effects and background music felt cheaply made and are grating on the ears, something which is particularly annoying when paired with the poor timing that a lot of the sound exhibited.

The one part of the show that I do want to praise is the background art, in particular the exterior panoramic shots of the countryside. These are honestly quite beautiful and a treat to look at, especially in the higher 720P resolution stream. I hope the person(s) responsible for these can be airlifted out into a better show where their talents would be put to better use.

Hoshizora is a tedious show to watch, and I would like to think it's not just because I’m a cynical so-and-so. I love a good romance story, but not when its lamely plotted. Every part of the show, with the exception of the art, feels weak and lifeless - as if there was no real driving force behind its creation, no love. There really are stacks of better anime you could be spending your time watching instead of Hoshizora.
You can currently watch A Bridge to the Starry Skies - Hoshizora e Kakaru Hashi in streaming form right here at UK Anime Network.

3
Boring to the point of tears - avoid.
LATEST REVIEWS