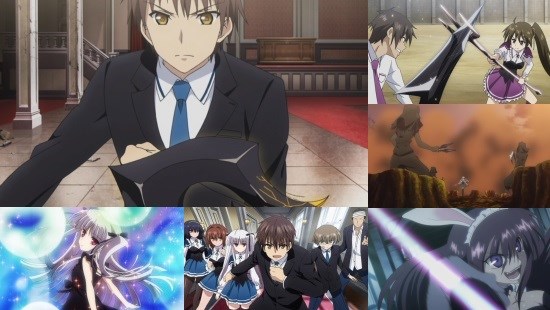 Absolute Duo - yet another series based off a light novel that is set in a 'magic high school'. With most magic high school anime the students usually train in order to fight some mysterious evil entity, whether it be monsters that appear from a different dimension, aliens that attack the world sporadically or other evil organisations that employ similar powers.

In Absolute Duo's case, from the get-go it doesn't really establish the true motive in place for the school's existence, giving very vague explanations for what is actually going on. The school is comprised of "Exceeds", special people who are injected with what is known as "Lucifer". This substance draws out hidden power within people that manifest as weapons called "Blaze" that usually take the form of standard melee weapons, such as swords, axes, lances etc. For the protagonist of the show, Tor Kokonoe, he is referred to as an "irregular" since his blaze takes the form of a shield attached to his left arm. Within the school itself, Exceeds are partnered into pairs known as Duos. Each duo fights together, works together and share a room in the dorm. As far as the viewer and the characters involved are concerned the school is in place in order to fulfil two main functions: The first is to develop strong combatants through rigorous training and experimentation in order to employ them in an organisation that acts like a private military company used mainly for peace-keeping missions. The second is to create the team referred to as “Absolute Duo” - while not explicitly explained what this means within the show, it can be gathered that this term is used to describe the strongest duo that is able to fully utilise the power of the blaze to it's maximum potential.

For most of Absolute Duo's twelve episodes it revolves around Tor Kokonoe and his duo partner Julie's relationship with one another in order to get stronger. Through this, the show teases the main motives through flashbacks and a few conversations they have with each other, and via a few other characters mainly commenting on how they are weak now but hope to be strong enough to not only seek vengeance for those they saw die but in order to protect people and prevent this from happening. The show's handling of this is mostly executed well with regards to Tor and Julie; however there is another character in the show who is constantly complaining about how weak they are, especially in comparison to others at the school. The main point of frustration with this character is how often they go on about it even after other characters reassure them that they are not actually as weak as they think or say they are. Handled more properly it could have been a clever part of foreshadowing to the eventual plot that is introduced around four episodes before the end, but here it just feels overwrought and far too obvious. This is perhaps Absolute Duo's greatest flaw - it takes so long establishing the school life setting that the constant battles/training amongst the students takes place within that when it gets to the actual point of all the training there's really not much at stake to make the viewer care about the outcome.

For a show mainly focused on battles and training the action scenes on display are pretty standard. Most of them focus on weapon-based combat and physical attacks with a few exceptions here and there, and each character has their own unique weapon but wields them in pretty standard ways. These scenes in question aren't very memorable or all that exciting, and otherwise Absolute Duo falls into the same clichés and tropes of most other ecchi harem shows set in a magic high school. The main character is constantly being told how special and unique they are, which draws the attention of the female cast members, while he also gets into quite the few mishaps mainly from Julie not understanding proper etiquette in Japan. All these usually resolve quickly enough, with the main accuser apologising in a manner that may in turn lead to more misunderstandings. Rolled into this is another thing Absolute Duo attempts but doesn't necessarily execute all that well - its humour. Most of it relies on harem clichés and running gags, many of which weren't funny the first time they were shown, which really makes things feel repetitive each episode when it tries the same joke again and again. There are a few times when some jokes land and get a slight chuckle but for the most part it's a big miss.

Part of this may be down to Funimation Entertainment's dub of the series which by their standards is not the best. This may in part be down to the to the dialogue written for the show, with most of the conversations being exposition regarding school events, battles and so on, alongside the rest of the standard harem jokes. It's a pretty by the numbers dub that is serviceable but there is no real stand-out performance on display.

This is also a fitting description of the show itself. It's a pretty serviceable and by the numbers harem show set in a magic high school. At this point the themes, setting and other aspects of the show is something you've probably seen done in another series and executed better. In the end Absolute Duo just sits in the list of shows that are average - it's fine and in no way bad but nothing really memorable.

5
A pretty standard by the numbers action harem show. Nothing terrible but nothing memorable either.