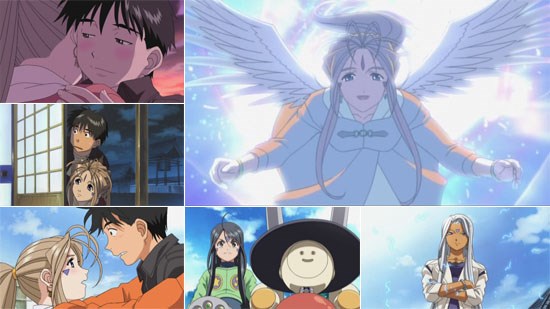 My new happy place begins when the bagpipes play (yes, the new opening uses orchestral bagpipes...) and ends as the final credits close on each new episode of Ah My Goddess: Flights of Fancy. Every morning, I watch another episode, and as I sit back and watch the fluffy happiness that just flows from the screen, I feel “Mr Grumpy” settling back into the recesses of my psyche. Such is the impact of the almost overwhelming positive vibes that Ah My Goddess beams out from my television.

The second series of the Ah My Goddess TV series continues where the first left off. The good and evil balance has been restored, Urd is still a bit peculiar after the experience and the halfwit demon Mara is where she belongs. All is as it should be, except that the Goddess Helpline is broken and Keiichi has lost his contract with Belldandy which means she has to return to heaven. Wait, this doesn’t sound good!

Actually, it is. As expected from Ah My Goddess each episode is a linear little adventure within the wider picture and entirely self-contained. Each episode has its own satisfactory ending which usually ends up with me going “What a girl!”, especially when she goes on about making people happy. And there are the naughty thoughts again. If only Keiichi wasn’t such a wuss... Not only is Belldandy essentially perfect she can also handle her alcohol, drinking even the most experienced alcohol connoisseurs under the table (but just try giving her some cola!), which is perfect for a night out in Newcastle. She can talk to animals, grant wishes and talk people out of criminal offenses. Simply perfect - it’s just a pity she comes with the usual familial baggage... bloody sisters.

As per usual and as per the first series, Ah My Goddess is very well produced with both the Japanese dub/sub and the English dub being perfectly audible at any time. I don't have any gripes with any of the voice acting and I regularly find myself switching between sub and dub depending on what I am doing while it is on (It's rare i can ever just watch something these days...).

So, long story short, it’s back to business as usual. Every episode so far has been a veritable feast in situational romantic comedy, which is just what I need to get over my grumps and for normal people the jovial and overwhelming happiness from the series will help you get over the winter blues.

In general, if you enjoyed the first series, then there is no good reason why you shouldn’t get onto the intarweb and get this first volume of the second series for yourself. It’s the same as the last series, except with this series you get a sixty foot giant drunken Hasegawa, which is just weird...