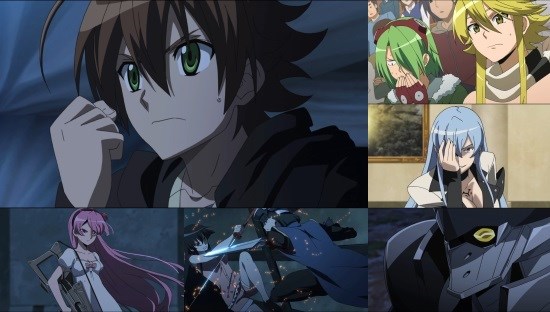 In my initial review for Akame ga Kill as part of the summer 2014 season looking at the first six episodes, I mentioned how dark and brutal the show is and how its comedy whenever it needed to take a breather just didn't work for me. It's now over a year since the show ended and I last watched this series, so enough time has passed for a fresh outlook to be considered after a second viewing. From that point of view, there are certain aspects about the series that I need to challenge on a second viewing, given that the main angle of the series that really resonated with me the first time around was its shock value. Going into this review already having seen the show in its entirety really affects my perspective along those lines, and since this review only covers the first collection of twelve episodes there's more things to cover as the show goes in a certain direction after my prior review of those first six episodes. That said, what I saw of the show during that original review and subsequent to it was something I really enjoyed, with a few caveats.

To summarise and recap firstly on the plot of Akame ga Kill, what we have is a dark action fantasy show revolving around Tatsumi, a naïve and optimistic swordsman from the countryside who has his worldview completely changed after witnessing the terrible corruption and depravity of the country's capital. After falling in with an elite group of Assassins – Night Raid – who are working to clean up the capital for an upcoming coup d'etat led by a revolutionary army, Tatsumi goes from plucky hero to assassin who is working in conjunction with Night Raid to make the world a better place for the oppressed lower classes and the weak who are picked on by the government and aristocracy. As you'd expect, the series focuses on the corruption and villainy of the wicked city officials while showing the plight of the civilian populace that inhabit the country. The series deals with themes such as extortion, prostitution, and trafficking to show the extent of illicit activities the city officials are involved in.

With the main group of the series serving as a group of assassins, this naturally leads the way to a lot of bloodshed and gore. For the most part the series deals with the assassin group expertly taking out city officials with relative ease. During the early episodes these action scenes are used as a way to show a copious amount of blood and gore, with Night Raid fighting with rather precise movements. However, as the series progresses a task force is introduced in order to eliminate them. When these characters are introduced battles and action scenes become more intense both visually and thematically. The main crux of this is each of the characters having a special weapon know as an “imperial arms” - each of these weapons has it's own unique design and usage which also helps give each character in the show their own unique personality. Seeing these characters fight against each other brings about some dramatic exchanges and outcomes that really affect the balance of the show.

In my first review I stated that the early episodes introduce too many characters, and the enjoyment of the early episodes tends to be based around how much you like each individual character of Night Raid given that each instalment focuses on Tatsumi being trained by and going on a mission with each individual. While this is somewhat true after the six episode mark, the series then starts to focus on Night Raid as a whole and looks at the bigger picture of its story. Whereas Tatsumi is still the focus, the characters in the show start to get equal amounts of screen time and also interact more, making that early criticism a non-issue as the series progresses. One note I mentioned earlier was that the comedy sections during the "breather" moments of the show didn't really work for me as I found it too large a juxtaposition from the brutal and violent action of the series. My thoughts on this haven't really changed as far as the early episodes go. However, as the series progresses and things start to gradually get crazier more comedic moments creep in alongside the violent action scenes, making the show both incredibly dark and serious but still comedic in a very dark and warped sense. Also included as part of this home video release is an set of extra comedic shorts. All of these last a minute or so and most of them are quick and not really memorable, but there are a couple that really made me laugh rather loudly as they poke fun at quite serious subjects and the show's characters.

As it progresses, the individual elements that make up the show start to blend together well and the show really improves from the outset, with things getting more over-the-top while finally getting the balance of its comedy right even as things grow increasingly intense. As the show gets darker and more gruesome we reach a point where no character is safe and the body count increases, making the show a display of moments to shock the viewer. Even on this second second viewing the impact is still there for most of these scenes as they are handled well, showing a mix of emotions from the cast on-screen which actually does a lot to develop their characters.

With regards to this UK home video release a few things should be mentioned. The Blu-ray set uses masters from Sentai Filmworks with language options presented in 5.1 surround sound for the English dub, along with both a subtitle track for the hard of hearing which uses subtitles from the English dub as well as the more traditional subtitles for the Japanese audio. It's a very small addition but a rather interesting one that it feels like more anime releases should have - some people like dubs, but others may also may need subtitles at times and want to read text that directly translates to what they are hearing. Speaking of the dub, as stated earlier this is a Sentai Filmworks show who have something of a track record for making dubs that are at best watchable but little more. However, this dub is possibly the best they have ever produced, and I really can not stress this enough -  the script is good, the acting matches the characters and fits the tone really well, and with 5.1 audio in tow it also sounds good. The entire endeavour sounds really well produced - it appears great care was given with this and it shows.  The actors get into their roles perfectly and deliver their lines with a lot of gusto, making the show really fun to watch. Thus, it's made Akame ga Kill a show I can easily watch dubbed or subbed and recommend others to do likewise.

While its comedy still doesn't work for me in its early episodes, as things progress the show really improves - things get darker and more over the top which makes for a rather fun viewing experience. When Akame ga Kill hits its stride it becomes compelling viewing - a visual treat with sombre and dark themes that has a Blu-ray release that perfectly displays this.  A dark fantasy that is violent and over-the-top, Akame ga Kill is a cool show for those wanting something action packed and bloody.

9
A dark fantasy that gets darker and better as it progresses, presented in a nicely produced package.