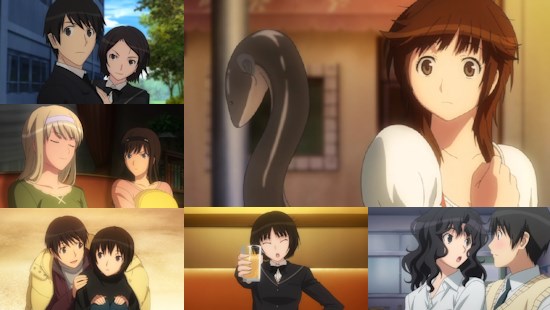 Did you enjoy the first series of Amagami SS? Did it leave you pining to spend some more time with your favourite girl? Well, I have good news, for the entire cast is back for an encore in the form of this second, shorter, series.

This time around, each girl gets just two episodes in the spotlight, via a variety of stories that carry on from where the series proper left off - a refreshing touch, as in most cases it means that protagonist Junichi is already happily ensconced in a relationship with the star of the arc in question, removing all of the usual "will they or won't they" romantic drama in favour of watching that existing relationship develop.

Admittedly, none of the actual stories told here are particularly thrilling or compelling (and let's face it, two episodes of anime isn't enough to do much of anything), and serve more as fan service of some stripe for existing fans, carefully playing into elements of the original show that resonated and serving up more of the same with the occasional twist here and there.

So, over the course of the series we see Junichi working with new girlfriend Ayatsuji as she aims to become student council president in the fact of some surprisingly strong opposition (and not just for the role of president); Rihoko continues to struggles with her unrequited love for our protagonist as the only girl to be thrown under the bus by series romantically (the poor lass); Ai Nanasaki moves on to become the swimming club captain while juggling her new relationship; Kaoru and Junichi get to enjoy a rather disastrous high school holiday; Sae's story continues to get the same delightfully quirky treatment as the first season; and finally Haruka's relationship with Junichi moves on apace in the midst of some tricky times for the couple. Oh, and of course Junichi's sister Miya gets the opportunity to close out the series as well in her own inimitable style.

To be honest, there really isn't much to say about any of these stories beyond their basic outline - each arc is crafted to give you what you want out of the character at its heart in a brief, succinct package and nothing more. It's an unambitious move but it largely works - all of these stories find enough time and material to bring out the charm of their star, while continuing to juggle Junichi's personality as an earnest but incorrigible protagonist in a proficient manner that makes him infinitely more likable than many other characters of his ilk.

Visually, everything also continues down the path trodden by Amagami SS' first season - its unremarkable, but makes good use of some strong character designs to make something appealing of its otherwise workmanlike efforts. Sure, characters go off-model sometimes, and the show's DVD presentation feels pretty fuzzy (we imagine the Blu-ray will be much sharper), but there's nothing here to spoil your enjoyment of the show. The same can be said of the subtitles on this UK release - the odd typo or two aside they're strong throughout.

It feels a little tiresome and reductive to boil Amagami SS+ Plus down to a case of "watch this if you enjoyed the first season", but this is perhaps the purest form of that train of thought - it is quite literally more of the same, bringing you another slice of its cast in a carefully measured form. If you loved some or all of that cast, then getting to spend another 40 minutes or so with each one will be music to your ears, but if you didn't care for them or only glommed onto a single character then you'll perhaps be less inclined to take in another dose of romantic entertainment.

6
It doesn't have time to flesh out its cast or their lives much, but if you enjoyed Amagami SS this is an enjoyable way of spending more time with your favourite characters.
LATEST REVIEWS