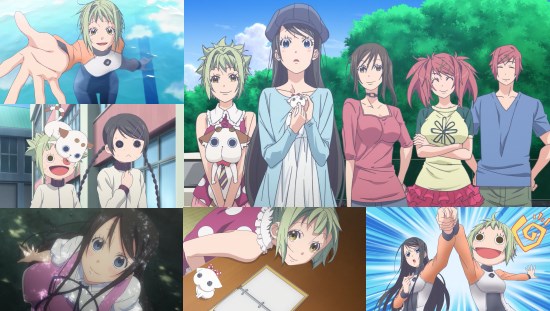 Moving away from your home and friends to a new area is always liable to be a stressful one, and this is particularly true of Futaba Ooki - a shy, introverted high school girl, we first meet Futaba torn between staring out to the sea which crashes against the shore of her new seaside location and gazing wistfully at a mobile phone that doesn't ring. In short, she's the picture of isolation, and as we see her start at her new school it's painfully obvious that making friends and starting over again are going to be incredibly difficult for her without someone, or something, to give her a shove in the right direction.

Enter Hikari Kohinata, who - on the surface at least - is the polar opposite of Futaba. Outgoing and eccentric, she wastes no time in trying to strike up a friendship, breaking through Futaba's uncertainty with sheer exuberant persistence. However, the next step in cementing this relationship might be a bridge too far for Futaba, as Hikari is a fanatical scuba diver who is dead-set on joining the after-school diving club and bringing her new buddy with her. Can Futaba really keep up with her energetic companion in the face of such a daunting hobby?

In many ways, the act of scuba diving itself isn't particularly important to Amanchu - instead, it serves as a reflection of Futabata's anxieties, uncertainties and worries throughout the series, and acts as a chronicle of her growth as a person. At the outset Futaba (or Teko, as she becomes nicknamed) is terrified of being shunned, upsetting others, and myriad other issues, and this is reflected by her worries about letting others down on account of her fears and lack of knowledge around diving. Offset by her desire to stick around with Hikari (herself nicknamed Pikari), she's pushed forward into confronting and overcoming those fears both in and out of the water, and one of the real pleasures of Amanchu is witnessing Teko's immense growth as a person from her "rabbit in the headlights" beginnings through to seeing the budding shoots of a more confident and determined girl.

For her part, Hikari also grows as a character - if you were to watch episode one in isolation you could easily pin her down as your typical anime "manic pixie dream girl" as she strides around acting oddly and basically chewing up the scenery whenever she appears, but this too is quickly revealed to be the mask that hides her own anxieties and insecurities. While her character doesn't blossom in the seismic sense of her friend's growth, she still learns to express herself in ways that seem impossible in that first episode. By the end of the series, you can't help but be left with a warm, fuzzy feeling at how close the two main characters have become and how their relationship has been so mutually beneficial, and it's the real highlight of the show.

Although there's a tendency to pigeon-hole this series as a "healing" show much like its predecessor from the same author, Aria (no, not The Scarlet Ammo), the very human issues it tackles it shifts it away from that designation quite markedly to elevate Amanchu into something far greater than a relaxing slice of life comedy. Indeed, the series takes on some surprisingly heady themes, with Futaba and other members of the cast often pondering their lifes in some very existential ways - what other series would turn running out of memory for photos on your smartphone into a ponderance of the meaning of the memories and relationships you cherish? Admittedly this can sometimes feel heavy-handed or even overbearing (especially if you're only coming along looking for a fun, relaxing ride from the series) but it does mark it out from a packed crowd.

This isn't to say that Amanchu is devoid of comedy, mind - far from it. The show loves to pepper almost every scene with eye-catching shifts into super-deformed characters, and there are lots of good gags, reaction shots and one-liners to keep things light without ever detracting from moments of character growth or introspection. At the end of the day the series is immense fun, and you're just as likely to finish an episode with a smile on your face as a wistful tear in your eye, if not both at the same time.

Visually, Amanchu is a real treat - its characters are beautifully rendered on-screen and never really drop off-model, with luscious eye lashes and expressive faces that are a perfect fit for the aims of the show. There's something that feels really unique about this visual style and its intense focus on animating its characters that really serves it in good stead, and thankfully the show also has some beautiful backdrops to set them against, especially when it comes to diving into water from school swimming pools to the ocean. The super-detailed character work sits surprisingly well against those aforementioned frequent super-deformed moments, to create a show that is amongst the summer's most eye-catching. The rest of the presentation is also up to the task, with good voice acting performances throughout and an enjoyable low-key, quietly confident soundtrack to ensure that Amanchu has the full package.

Having come to this series as someone who watched the first season of Aria the Animation and really didn't take to it, I was expecting to bounce off Amanchu in a similar vein, but after a somewhat wobbly start - let's just say Pikari's character is an acquired taste initially - it won me over with its warmth, charm and tightly-scripted episodes in a way which Aria never did. As mentioned, watching its main characters learn and grow is a true pleasure, powered by a series that finds ways of making you care about them to ensure that its depiction of that growth is effective. By the end of it all Futaba's happiness mirrored my own - a feeling elevated in no small part by my ability to relate to her, certainly, but that fact alone speaks to the strength of its character writing. When people bemoan the reductive labelling of anime series as "slice of life", I suspect Amanchu may become exhibit A for many, and rightly so.

You can currently watch Amanchu! in streaming form on Crunchyroll.

7
It starts awkwardly, but just like its characters Amanchu grows into its skin to produce a thing of real beauty.
LATEST REVIEWS