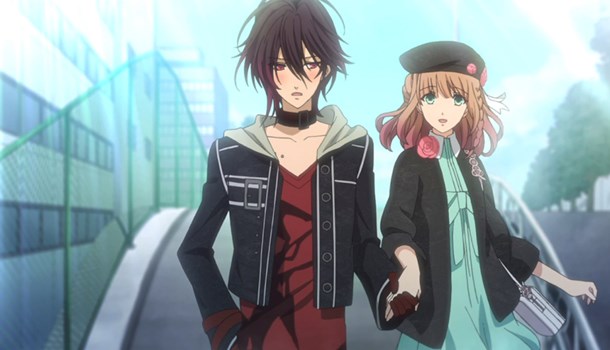 Memory loss is not a condition I would wish upon my worst enemy. Although fleeting the loss of identity, even temporarily, is a feeling which stays with you. Amnesia, the permanent or temporary loss of some or all of your short or long term memories is a condition which is normally borne from severe mental trauma, either physical or psychological. When it strikes, one of the first noticeable symptoms is confusion as your brain tries to re-sequence and re-organise the world around you.

What is not a normal symptom of amnesia is the corporeal manifestations of spirits in the form of flying elf-eared court jesters named Orion.

Our heroine has a problem. No only is her name forgotten (not just forgotten as it isn't actually referenced at all in the series to date, so she will henceforth be known as Heroine, or Green Eyed Girl – GEG for short), but she seems to have forgotten everything before the 1st of August. The rather odd transdimensional being, Orion, appeared to GEG as both a guide to allow her to solve her problem, but also as a result of her affliction by residing inside the vacuous gap inside her mind caused by the removal of her memories. The only problem is, if Orion helps GEG solve the issue of why she cannot remember anything before the 1st August, won't he disappear as well? Either way, this lack of memory thing is sure bothersome.

I appreciate that so far Amnesia doesn't sound that exciting. There is a reason for that... it isn't. Our heroine seems to be buried into something more sinister but other than being surrounded by pretty boys, half of which she seems to have had relationships with in various time lines/universes (I will get to this in a minute), her life seems to be pretty standard. GEG goes to college, works part-time in a maid café and spends her free time hanging around with one of her boyfriends and generally doing girl stuff. Not exciting really. Where things do get interesting is that GEG seems to be stuck in something which is affecting causality and the passage of time (admittedly, it could just be a paradox, or a Star Trek TNG style/Groundhog Day Möbius time loop). Either way, she is stuck between the 1st and 5th of August, the only issue being that each time that time restarts, things change. For example, her boyfriends, people's personalities, her situation, etc. (Sounds like Endless Eight! - Ed.)

So far, we have no idea why this is happening. What I am certain of is that GEG's amnesia is not a medical issue. For starters, an ominous warning of “do not go to the hospital” resonates within her mind, but the sheer fact that memories from previous time lines are returning to her, as well as fresh bouts of memory loss occurring at each jump, suggests that the amnesia is caused by the causality errors.

To summarise. I have not the foggiest what is going on and it doesn't look like I will find out any time soon either.

In fact, to summarise a bit better, the only interesting factor in the series to date is actually Orion. He is a peculiar little chap, reminding me a bit of The Great Gazoob from The Flintstones, except not patronising, sarcastic, and not green. So far though, other than providing some much needed breathing room from GEG's melodrama, he hasn't exactly done much.

It is also obvious that, as a perverted male in my late twenties, I am not the intended audience for this series. That fact was made quite clear by the large quantities of rather beautiful, well dressed and classy men in the series, all of which have tried, through various hints, to get into GEG's knickers. If I was going to compare to a popular boy band, we have all of the major bases covered. We have the dark pretty boy Shin, the glasses wearing smart-arse, the blonde sporty type with the big gob and we have the hipster, Ikki I think his name was, with eyes that seem to hypnotise young girls. All of them seem to have paraphernalia associated with a deck of cards and they all are dressed like models. Of particular annoyance in these first few episodes is Shin, who is doing a good job of being hard to get, as well as especially needy. What I find quite hateful about him, other than his personality, is his dress sense which relies upon wearing odd shoes and socks. It irritates me to the core.  But again, I am not the intended audience. It also doesn't surprise me that this is partially based on a dating game for young women. Although, that blonde chap... tasty.

Amnesia is clearly a series which is trying its hardest to justify showing the heroine being a clueless romantic with as many of the male companions as possible through the use of the old trope, time travel/alternative universes (not decided which yet, but must be a bit of both!) Call me old-fashioned, but I thought that the fun of romances was the build up? Having a heroine keep falling into these relationships from a cold start and then stumbling around for a few episodes as she gets ruthlessly fondled without permission by these gentlemen, isn't what I would call fun. Its quite amusing I will give it credit for that. But watching someone stumble continuously while working out what they are doing, who they are, and why is this chap kissing me, and then forgetting it again is frankly exhausting.

I would honestly like to know the opinions of our female readers of this series, because I just don't get it. So far, we have barely been given chance to get into the relationships between the gentleman in question and GEG, they kiss, get close and then, BAM! GEG gets hit by a car, truck, falls down a cliff, and the time line resets again.  It just feels like a giant tease to me.

One further little aggravation to add, as if the fire needed more kindling. I am having issues with the character design. Each of the suitors has what seems to be an eye condition. I don't think that irises are supposed to be like a kaleidoscope; they are certainly not supposed to reflect in all the colours of the rainbow. If this was a creative decision, I question the sanity of the art director. Especially as there was a conscious decision made to give GEG only green eyes. Consistency people! If I am being too harsh here, please leave me a comment at the end of this review and we can discuss it honestly, I don't see why this decision has been made.

So, Amnesia. As someone who knew nothing about the series, franchise, or the game, I can honestly say that five episodes later, I am none the wiser. In fact, I think I might have forgotten several large elements of my life, just by sitting through it.

You can currently watch Amnesia in streaming form via Crunchyroll.

4
A show that is best forgotten.