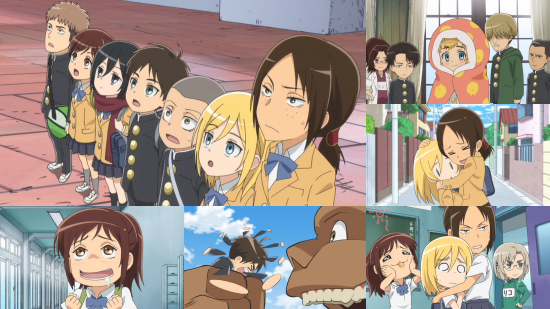 Anime and manga crafted to make money through distribution, broadcasting and merchandising for their production studio and the holders of the Intellectual Property (IP). It is the duty of the team to create a product which, to put it in no uncertain terms, will “print money”.

Before I start, I am not against this idea. I am a firm believer in making the most of an IP. Let's be honest here, I am also a victim of some of my favourite IPs and their money printing tactics. One of the most common tactics used is to create a spin-off. Take some of those characters or settings which you have grown attached to in the original IP, and put them in a whole new wacky scenario!

Attack on Titan is perhaps one of the most popular Japanese franchise to have been released into the west for almost a decade. The sheer number of fans that you see at conventions make it obvious even to someone as completely oblivious as myself that the creators have hit on something big. So, from a series whose writing is driven around building a sense of tension, action, loss, despair and treachery, comes a light hearted slice of life series featuring the members of the Survey Corps, focusing on Eren Yaeger and Mikasa Ackerman.

Taking us away from the ruined Titan-filled world where life is only possible behind the Wall, we find ourselves introduced to Attack Junior High School. This is not your normal school though. This school caters for both humans and Titans of all sizes, and while the Titans are no longer the devourers of humans they are the devourers of... lunches. Oh, the humanity. However, these thieving Titans won’t get away with it for long, not if Eren, the hamburger obsessed lunch fiend, has anything to say about it.

So begins a twelve episode adventure in which Eren and his friends (you might recognise them from the anime and the manga) try to live out their school lives, cleaning and maintaining the school walls and basically having fun... and that is all there is to it. All of the characters are there, though in a slightly shrunken deformed form with giant heads, complete with their original voice cast in both English and Japanese. What more do you want?

Well, to begin with, some of the depth of the characters is missing. In Attack on Titan, much of Eren’s character comes from his development through the loss of his father, who vanished during Titan research, and the loss of his mother, who was devoured in front of him during the Titan excursion. The same is true of the others. Mikasa, Sasha, Armin; all of them have excellent character development during the series proper.

Unfortunately, character progression doesn’t really occur in or translate to this series. Attack on Titan: Junior High requires one simple thing; you must be familiar with the source material as each character, from Eren’s over exuberance, Mikasa’s cold admiration, Armin’s intellectual cowardice and Sasha’s obsession with food are all just tropes set by the source material. Now, okay, this is a series which is focused on existing fans who like these tropes and each characters’ nuances. In the mind of a fan, more development isn’t needed. What is more important is that the characters having fun together.

While the writing isn’t great, there is little or no development in characters, and the stories are, well... just odd (and the student council president contest is best described as being very odd to be honest), although even that actually doesn’t matter a great deal. Attack on Titan: Junior High is good fun, and shows the characters in a whole new context. Rather than being in constant peril of being eaten, it is just the contents of their lunch boxes being eaten. You know what? That is actually quite nice. Perhaps everything being less stressful is its own form of character development.

All in all, although I am not the world’s biggest fan of Attack on Titan, I have found myself laughing out loud over the course of this series, and for the most part I have found Junior High's antics to be quite fun. If you think of yourself as a true lifelong fan of the franchise, you would be mistaken if you decided not to at least give it a go.

6
A new take on the Attack of Titan cast - less stress, more giggles.