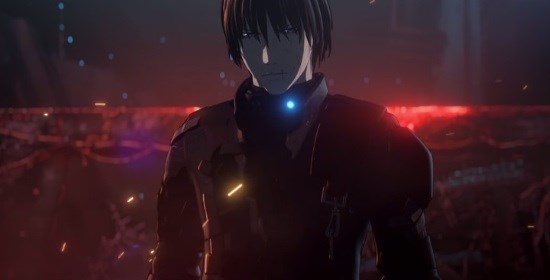 In a dark and distant future a lone wanderer is searching a hulking and hostile technological world known as The City looking for humans who posses the mysterious Net Terminal Gene that will allow them control of The City. Elsewhere a small pocket of human survivors are on the brink of starvation and desperately trying to find a new food source whilst avoiding the deadly safeguards The City regularly sends to butcher them. When they cross paths can and will they help each other? Or will The City and its endless army of robots kill them all?

This 2017 Netflix backed film is based on the cyberpunk manga by Tsutomu Nihei (who also penned Knights of Sidonia and Biomega) and animated by Polygon Pictures. Interestingly this film was produced after the studio inserted a short clip of Blame! into the second series of Knights of Sidonia as a show within a show to much acclaim for nailing the aesthetic of Nihei's dark world. Now, the thing to take from that is that there is a world of difference between getting the look of a world down in a two minute clip and turning that into a living breathing entity for a hour and forty-five minute movie. I'm glad to report that Polygon manage to make the transition successfully, if a little generically, something the manga was most definitely not.

The film is designed (as noted in the on disc making of) as an introduction to the world of Nihei, one that is easy for a mass audience to consume. They do 100% achieve this goal as I enjoyed the movie enough to go out and buy the first volume of the manga (fantastic - go buy) and order the release proper. That may sound like a glowing recommendation but be warned – this is science fiction 101, a hard cyberpunk sci-fi, but one you have seen before in many different settings. This is a shiny and entertaining one, but this well worn ground, no effort has really been made to try and deliver something new or dare I say even memorable. Despite a through line to follow the actual story is very slight and at times feels a little haphazard, with the script throwing in a threat for Killy to fight out of nowhere simply to allow for lots of explosions and shooting in the third act. As a cyberpunk anime it also has the imposing shadow of a certain Major Kusanagi as a comparison, however unfairly.

Of course a generic story can be saved by a strong cast but again we are left lacking. Our hero Killy (pronounce Kiri) here is in the mould of Clint Eastwood's "Man With No Name" minus the personality or charisma. He has less than twenty lines in the entire movie and up until the the end remains a mystery bar one hint dropped by the main villain. He does however exceed in the action scenes, proving a capable and destructive ass kicker. The only other character of note (that I can go into without spoilers) is Zuru who is essentially the gutsy anime girl trope made flesh, who ultimately adds nothing to the plot. Zuru's whole village is populated by clichés and because of the full face armour they wear to fight The City's security robots it can be hard to keep track of who's who.

The one area where the anime gets top marks is with the visuals and realisation of the world our characters inhabit: it's a suitably gritty and oppressive world. Polygon pictures pulls off the dirty look of the manga well and seem determined to raise the bar when it comes to 3D animation as this is most definitely their best looking project so far, and several steps above the awful looking Godzilla movies the studio has produced of late.

The best compliment I can pay to Blame! is that I will happily recommend it to anyone who asks, I would also tell non anime fans to seek it out as an enjoyable slice of science fiction that Hollywood would likely ruin (please see Dragonball Evolution for details, or better yet don’t). I’m also looking forward to the confirmed sequel to see what Killy did next and keeping my fingers crossed the creative team step up and fix the flaws of their first entry.

7
It does exactly what is says on the tin, which given the source material is more than a little disappointing, but put that aside and enjoy the visuals, action and atmosphere.
LATEST REVIEWS