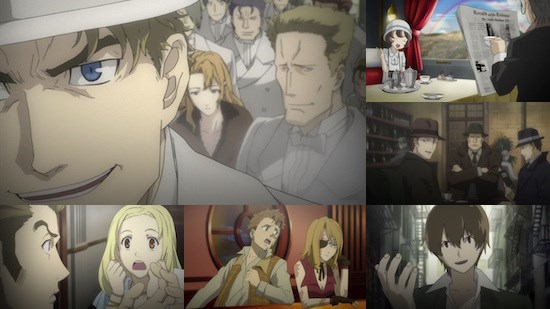 Some five years after Manga Entertainment first brought Baccano to our shores with a DVD only release Anime Limited have now taken up the reins and are releasing this Takahiro Omori series on Blu-ray for the first time here in the UK. Written by Ryohgo Narita of Durarara fame, Baccano is a critically acclaimed classic. Much like Durarara, Baccano offers up a complex multi-layered story and ensemble cast. However, while Durarara is set in modern day Ikebukuro, the events of Baccano take place predominantly in 1930s America.

The very first thing you will notice about Baccano is the catchy tune (Guns & Roses by Paradise Lunch) that accompanies the series' opening sequence, which you will find yourself humming for weeks to come. The second thing you will observe is the sheer number of characters referenced in that same opening sequence. Once the opening credits have run their course we delve into Baccano’s opening scene, which is a somewhat self-referential discussion of the complex tale about to be laid out for your viewing pleasure. This isn’t as simple a discussion as you might imagine - there’s talk of a ship; a train; of a multitude of “players”; where to even begin when telling such a tale; and of course the all important question of just who would be the main character? Given the contents of the series opening credits you may already have some inkling of the futility of such a question.

The tale begins in earnest with a trip to the backstreets of 1930s New York and an act of charity rewarded by an attempted mugging, which results in someone losing a few fingers with surprising consequences. It is at this point I have to mention that Baccano is absolutely not a series for the squeamish viewer - it is laced from start to finish with blood, violence and gore. From this point the story branches out in all directions, flitting about from one year to another. Mostly this revolves around the early 1930s, though it does go as far back as 1711 at some points. There is a mob war and a search for a fellow by the name of Dallas Genoard. There is a train, the Flying Pussyfoot, on which something went very, very wrong. There’s a galleon on which something mysterious occurred several hundred years ago. There are some small-time bandits with hearts of gold, a gang of illegal explosive sellers, multiple factions of violent lunatics, a variety of mobsters, hired goons and professional assassins, some immortals... and that’s just scratching the surface.

You may have gathered that Baccano is a massively complex series and requires a huge investment of thought to properly follow. This makes the first few episodes in particular very heavy going. However, it is extremely rewarding if you can manage to keep track of the cast and the multitude of events, dates and locations. There are so many story threads flying around, occurring at different times and in different places, that you will almost certainly struggle to keep track. This is a series that rewards repeat viewings, with new perspectives and previously missed details noticed in each new watch. Even with all that complexity the series still manages to tie all those threads together for a satisfying conclusion, masterfully bringing together events and providing an almost perfect conclusion in episode thirteen.

“Episode thirteen? But isn’t the series sixteen episodes long?” I hear you cry. Well, yes - episode thirteen was the end of the original series run, and the final three episodes were part of a later collection of episodes added to the DVD release. I would argue that the final three OVA episodes, while entertaining, add nothing to the series as a whole. If anything they may take away a little of the neatness from the conclusion of the series. They only really serve to answer questions that didn’t really need to be addressed and add a new character previously unreferenced in the series. If you consider the last three episodes as extras rather than a continuation of the series then their value is much clearer.

Our review of Manga Entertainment’s prior DVD-only release was somewhat critical of the video quality on offer, so I am pleased to report that there are no such problems with this Anime Limited HD treatment of the series. Despite being an upscale the series looks terrific on Blu-ray; Anime Limited have provided the definitive way to view this classic series. The audio is also solid, and Baccano is one of those rare series in which the English dub is preferable to the original Japanese. There’s just something about 1930s gangsters that needs an American accent.

When all is said and done Baccano is critically acclaimed and considered a classic for a reason. The way it weaves so many threads into its story and yet still reaches a satisfying conclusion almost defies belief. If you can manage to wade through it's complexity, especially in early episodes, the pay-off is more than worth it. Baccano is a series which should be on the "must watch" list of anyone who likes their anime to be a little more mature and thought-provoking then the norm. Unfortunately, we don’t have a retail copy on hand to comment on the package as a whole, though watch this space for a possible future update. However, judging by past Anime Limited releases and looking at the details they have released thus far it certainly appears as though they have done the series justice, potentially providing the definitive release for one of the classic must-own anime series of the past decade.

Collector's packaging consists of a rigid case with a Digipack to hold the three Blu-ray discs, plus a booklet. On-disc extras consist of three OVA Episodes, clean opening and ending credits, Baccano! The Complete Guide featurette and promotional video.