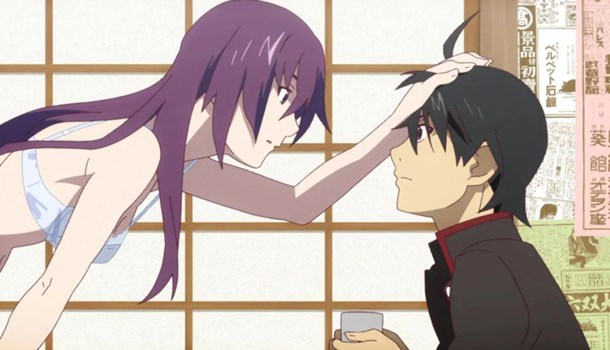 In one of the biggest surprise announcements in UK licensing of recent years, and much to the consternation of those who imported the £150 US Blu-Ray (Hey, I resemble that remark! - Ed), Bakemonogatari is hitting the UK from MVM Entertainment at an amazingly reasonable price. Surely this should be a no-brainer purchase with the huge price drop combined with the fact that people were prepared to spend that kind of cash of the series... right?

Bakemonogatari is about... well, let me sum up my experience of the first episode: "Wow this is pretty... ooh panties! Wow that’s a lot of subtitles. Oh no don’t jump off there... phew... wait don’t put those in there! Boy that looks painful... boy that looks really painful.... huh?"

Based off a popular light novel series from Nisio Isin (currently spanning sixteen volumes), Bakemonogatari follows the trials and tribulations of Koyomi Araragi, a high school senior who is recovering from having become a vampire and then turned back again.  Whilst this may sound like starting the story on the last page... well, to some degree it is, but our protagonist's past isn’t really the focus of the eight episodes we’re presented with here, providing the first three story arcs of the series as it does.

Instead we follow his present as he meets a variety of troubled young girls with some truly bizarre problems, all of which have a slight supernatural bent involving the usual array of ghosts and demons, albeit not always in the way you might expect. Hitagi Senjougahara is the leading lady of the series and she starts the series as it means to go on, as she is almost totally weightless and has been pushing away everyone around her to conceal her problem. Exactly why she’s afraid of people knowing about this is left unexplored for now (as is how she can conceal so much stationary up the sleeves of her uniform without it being ripped to shreds every time she moves her arms). Future arcs deal with a young grade-schooler with the world’s largest backpack and a basketball player who has some... unconventional habits.

Whilst the supernatural problem side of the story is interesting and well done, its nothing we haven’t seen before and you can normally guess both what’s actually going on and what the resolution will be long before the end (especially if you’ve read XXXholic) - fortunately, Bakemonogatari backs this up with what’s almost a slice-of-life series that runs alongside these events. The show regularly pauses anything to do with its central plot to go off on tangents exploring specific component elements of the plot which then loop around to become absolutely hilarious comedic moments as well as explorations on a variety of unusual topics, often revolving around the intricacies of the Japanese language and the composition of Kanji. This is where the series both shines the brightest and also where it falls down the most. The comedy is brilliant throughout the series and these character-driven segments serve to highlight them and to allow the creative team to really let rip and just flat-out have fun with what they’re doing in some truly inventive ways. On the other hand though these segments occasionally run on much too long, with some running gags outstaying their welcome a bit. In particular the second story arc suffers from this and goes on far too long for the amount of story being told; it could really have done with being cut down to two episodes. These occasional dips certainly aren’t enough to spoil the series but they do show the signs of needing an editor’s big red pen.

Visually, this is a SHAFT show, but beyond that this is probably the best-looking of all the series SHAFT have worked on - it's staggeringly stunning on a visual level, with the kind of animation quality that most big-budget features fail to achieve. I literally cannot praise it enough; despite being produced beforehand, suffice it to say that it makes even Madoka Magica look like it was drawn in crayon - well... apart from the bits of Madoka that kind of were drawn in crayon, that is! What’s more impressive is that this quality is maintained across several different styles, with some scenes switching to more or less complex styles of animation without feeling too jarring. It also manages to totally get away with replacing some of its animation with text boards describing action that would normally have been animated, like ‘holds hands’, as well as explaining huge swathes of back story, side story and random tangent through text splashes that hit the screen so quickly you’d need to almost go frame-by-frame to read them all (I’d recommend not doing this on your first run through the series though). The amount of on-screen text overall is quite staggering to be honest, so this is definitely not a series you want to put on in the background as you’ll need to be paying attention (doubly so as there’s no English dub)!

At its core, Bakemonogatari feels like someone gave the guys behind Oreimo LSD and told them to remake XXXholic. It really is that bizarre and is like nothing I’ve really seen before in terms of how it presents itself. Whilst the aforementioned quibbles with the execution of the story do cause some annoyances, it’s certainly not going to ruin your enjoyment of a series you no longer need to re-mortgage your house to own!

Japanese stereo audio with English subtitles.  Extras consist of character commentaries for each episode, and clean opening and ending themes.