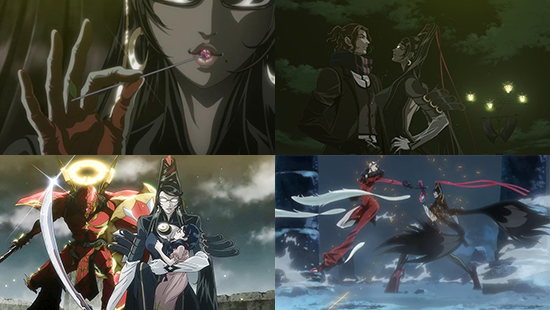 By the time this review is published Bayonetta 2 will already be flipping and pirouetting across your television screens as the disc spins elegantly inside your WiiU console. As a larger-than-life figure with an inimitable design, the slinky, sexy, sassy Bayonetta still immediately stands out from the densely-packed crowd of bewilderingly varied video game characters. As recognisable as Bayonetta herself is, though, the world that she dances through is a little fuzzier - it has been a long time since her last outing, as the first Bayonetta game was released five years ago in 2009. For those of you encouraged by Bayonetta 2's strong critical acclaim in the gaming press and who want to jump aboard the ride, Bayonetta: Bloody Fate has been designed with you in mind. As an anime retelling of the storyline of the first game, it's an opportunity to get up to speed on the heroine's position in the world coming into the new game, but can it offer more than what's already found in the synopsis paragraph on the Wikipedia article?

Five hundred years ago, the balance between angels and demons on Earth was held by two separate sacred orders - the Lumen Sages, and the Umbra Witches. Each one was custodian of one of the "Eyes of the World", the eyes of the Creator-God Jubileus, which oversee the correct passage of time and behold the achievement of justice. Ancient accords between Sages and Witches maintained a harmonious equilibrium for centuries, but when a Sage and a Witch broke the taboos which kept them apart and conceived a child who could hold the powers of both orders, they pulled the first thread that would unravel this peace. Both Lumen Sages and Umbra Witches annihilated each other in a savage and bloody spiritual war across the planes of existence, and with their ranks decimated and temples smashed both societies were forgotten by history and crumbled into dim legend. Nowadays no known sages or witches survive...

...except for one: Bayonetta. Having woken up twenty years ago after centuries of slumber in a coffin in a swamp, she has spent the time since wandering the earth, partially from the pull of recovering her lost memories and rediscovering what she should be, and partially from the push that she's relentlessly pursued by legions of warrior-angels who want to seize the Left Eye of the World that still remains in her possession! Even if she cannot remember her past, though, Bayonetta certainly can recall the skills drummed into her and she handily despatches all-comers with... dominating effect. After decades of searching and fighting, though, Bayonetta may finally be discovering some answers. The Ragna religion, a wealthy and world-spanning cult, is about to celebrate its new epoch with the rebirth of its own god. The rest of the world looks on with only mild curiosity at these weird cranks, but as reports of strange visitations and mass-suicides spread, there may well be something to that apocalyptic soothsay after all; and Bayonetta feels a curious inexplicable attraction to the Ragna's leader, Balder. Could he hold the key to her past? And what strange and terrible things will unlocking that door set loose?

Although Bayonetta: Bloody Fate is a retelling of the storyline of the first game, it is a distinct adaptation and not a plain rip of the in-game cutscenes as other anime versions of games like Galerians: Rion have been. Everything is newly-drawn, and while the same general arc is followed some events have been altered and adjusted to better fit a movie's running time, so those of you who have played the game will still be able to see something new.

What you can see is also quite attractive too. The background art for Bayonetta: Bloody Fate is gorgeous. Replete in elaborate detail and resounding with Baroque ostentation, these sumptuously ornate stages are a perfect backdrop for vivacious characters. Even the opening introductory narration is set to images of stained-glass windows. Character designs themselves match it, from the hulking angels decorated like walking church raredos to Balder's strutting peacock glam (literally - he wears one like a boa) and Bayonetta's own slinky, flattering catsuit that has more to offer than simple titillation as it's combined with pistol-barrel stilettos and a towering hairpiece (there are a couple of brief shots of her rear but otherwise her magical snaking hair protects her modesty), eveything strikes a confident pose that beams with style.

Once the characters leave their pose and start trying to move, however, is when the cracks in this marble statuary start to appear. Bayonetta: Bloody Fate has a bit of a wobbly start and rather alarmingly for an action anime many of the early fights can be quite crude - taking a still image of a character and doing a fast-pan across to give the illusion of movement, extensive use of speed-lines and zooming in and out of images with no sense of scale are all cut-price effects that you'll see in the opening scenes. It's a great disappointment and leaves a poor first impression, but the film does manage to recover from this initial stumble and finds its footing with steadily more sophisticated spectacle as the story goes on, leading to a final apocalyptic confrontation that seems ludicrous in its scale but which you accept as the natural progression of successive stages of ever-huger battle.

The progress to that battle means that there are few digressions over the course of this anime - it's a straight drive to finish with little in the way of reflection, and much like the clumsiness of the early battle scenes dialogues in the first act of the movie are laden with exposition, Bayonetta's partner in demon-slaying Enzo being a bad example in the bar scenes. When you get that out of the way though conversations can loosen up and trip along quite merrily. There are no real surprises - Cereza's true identity is obvious the instant you lay eyes on her - but Bayonetta carries herself with suitable sass, there's a little pleasant banter between her and scoop (not two-scoops, I must stress) hunting paparazzo Luka, and Balder makes a decent stab at being a tragic fallen villain of misguided ideals rather than being a raving psychopath.

The anime has reunited almost all of the voice cast from the first video game to reprise their roles - which considering what's said in the commentary, is no small feat and an epic journey which would be worthy of a movie in and of itself! Hellenna Taylor's cut-glass take on Bayonetta is clear, crisp and commanding, although the script inflicts on her a few really gratuitous F-bombs that spoil the mood of the scenes they drop into, and it's lovely to see some elocution in a voice cast. With the one exception of young Cereza, who yells "mummy!" at a RPM that could drive most superbikes, the remainder of the cast put in reliably professional turns as well; Yuri Lowenthal has a decent callow youth in Luka, while J. Grant Albrecht gives suitable gravitas to Balder (fan-favourite Norio Wakamoto also features as his voice in the Japanese language track, seiyuu-hunters!) While Enzo's voice actor has been changed, that's not necessarily a bad thing because John Kassir - the Crypt Keeper himself! - steps up to the plate instead. The English voice cast also merit mentioning thanks to a superb commentary track - Taylor and ADR director Johnathan Klein have a brilliant, friendly rapport and an established professional history together to make a foundation for their discussion. The commentary is packed with information, keeping up with detail right until the end of the movie with specific production information for the film itself (rather than just a disconnected cast interview while the movie plays in the background, as with Evangelion 2.22) lots of anecdotes both personal and professional, and I happily agree with other reviewers in calling it perhaps the best commentary of the year.

Overall Bayonetta: Bloody Fate is an undemanding, easy watch that's a decent way to spend a quiet night in. It's coherent enough for new viewers who haven't played the games to enjoy, and while it lurches about with several mistakes in the opening scenes, once it finds its balance it provides you with active fighting delivered with artistic flair.

7
An efficient and straightforward action anime, it takes a bit of time to find its feet but regains its balance to dance through a pacy routine in a stylish setting.