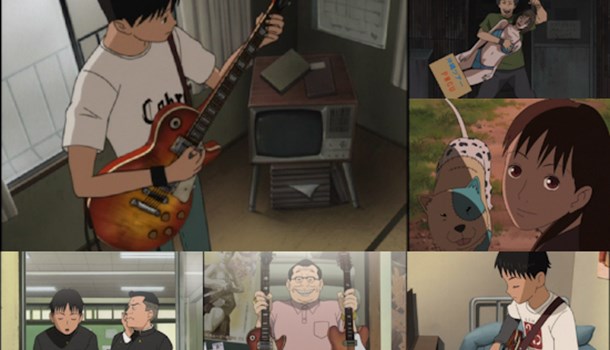 Beck charts the rise of the titular band, through high school trauma and real-world commitments all the way to the stage and stardom. For those who love a solid drama, it's like the anime equivalent of Young Person's Guide to Becoming a Rock Star, a bit of a cult show from Channel 4.

The star of the series is everyman Koyuki, who gets caught up in a wave of events that see him getting involved with a group of hardcore musicians who want to make it big. On the way, he'll have to deal with bullies, girls, swimming trials and a lecherous father figure with a heart of gold and libido the size of Geneva!

We've been a bit remiss with Beck - I've had volume 1 sat in the office since I bought it at the last London Expo, but the hard and fast rule here is that we review what we're sent ahead of what we buy, and given the massive influx of anime lately (especially titles like Naruto and Bleach which arrive in 3-disc force) Beck hasn't had the attention it deserved. But that's also done the series a favour.

Were I grading just the first volume, I'd likely give Beck a 6 or 7. It starts slowly, the English voice cast take a while to get used to and the bullying antics just irritated me - I don't like my anime leads to be weak, and Koyuki is pretty pathetic at times. However, by the end of volume 2, Beck had slipped up a notch - more forceful (and entertaining) characters enter the fray, the music notably improves and the series starts to gel, and because of this Beck becomes something of a unique anime in the UK - a series that thrives on drama rather than spectacle and, like Funimation's other drama series, Suzuka, it's a breath of fresh air.

Beck's distinctly Japanese take on rock music is also fascinating - in series 3 Koyuki, in a fever, sees dead rock legends such as Lennon and Freddie Mercury picking up garbage after his concert - it's also fun to get all the T-Shirt and other references throughout the show, (Chiba's take on music was inspired by Zack De La Rocha from Rage Against the Machine for example) and proves that the writer, Harold Sakushi, knows his stuff.

If I'm going to make one severe criticism, it would be the English dub. Koyuki's VA is not the amazing singer that the characters in the anime react in such awe too, and it makes the series unintentionally hilarious in places - whilst the singing is passable, it's certainly not awesome. Stick to the Japanese track if you want to experience Beck properly.

All in, this is a series that fans of both music and drama will adore, just be wary of the slow start.

Commentaries and music videos litter the first three volumes, and are entertaining extras.

9
Entertaining and engaging after a while, Beck is well worth a look as an anime that is truly distinctive.