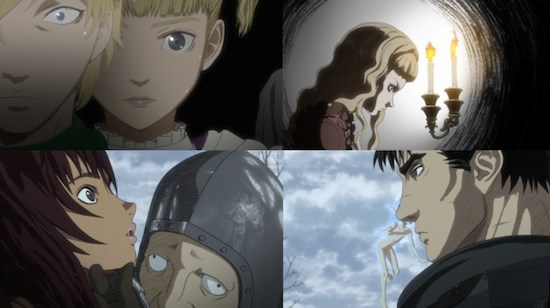 When 2016’s much maligned Berserk anime adaptation finished up, teasing us that more would soon be on the way, opinion was divided. After being burned by a mountain of cheap CG and jerky camera work, fans of the long-running manga just wanted shot of any further travesties to the original source material. Others were more hopeful - spurred on by Japanese Blu-Ray releases that replaced a lot of the worst CG with traditional 2D work, there was a whisper of a hope that 2017’s Berserk might end up being a wholly more enticing piece of work; the production staff taking the fan feedback on board and delivering up something with substantially more 2D content from the start.

Alas - 2017 Berserk looks much the same as 2016 Berserk. There has been no large-scale overhaul. No top-down addressing of the many visual sins fans lambasted last year’s adaptation for. If the sight of gormless CG-ragdoll Casca flopping around again has you smoking with anger, it’s time to steer clear. But... but... if you’re willing to give Berserk a little of your time, you might just find things a little easier than last time.

You see, while Berserk might not have done away with the CG, it feels like it’s finally starting to get a handle on using it more effectively. Gross, blocky abominations like last season’s antagonist Mozgus are thankfully firmly in the past - with the show’s direction now framing the CG figures more artfully, so that at times, they at least offer the illusion of fitting more seamlessly into a 2D world. The direction continues to be a masterclass in how to pace an action series - frenetic and constantly thrusting forward with both plot and character development. While this Berserk might not always look the prettiest, it manages to get the pulse racing all the same.

Dropping us right in with the return of series antagonist Griffith, we’re treated to a hefty main course of the moral anguish that makes Berserk such a fascinating story from the off. Restored to his resplendent, ‘pre-fall’ look of chivalric silver armour and tumbling white locks, we’re offered a taste of the old Griffith - but with new, questionable motivations.

Other characters are also suitably fleshed out - with last season’s standout Lady Farnese getting considerable back story development in episode two (which, remarkably, gets about eleven minutes of almost entirely 2D animation). With Farnese now teaming up with Guts out of a kind of sheer awe in his capacity to survive and push onward in an unforgiving world, we start to see the assemblance of a ‘group’ dynamic centred around Guts which will no doubt lend a much needed sense of camaraderie to this set of episodes - something which was arguably lacking from much of the last season.

Covering the ‘Falcon of the Millennium’ arc - Berserk’s fourth main story arc, and one that originally ran between 2001 and 2010 in the original Japanese manga - it’s hard to see how this short, thirteen episode run will be able to contain the whole span of everything that plotline entails. But with the existing trailers promising the arrival of the series’ titular Berserker Armour, it’s safe to say that what’s in store will help solidify the meaty, thematic substance at Berserk’s core.

It still might not always look the best, but three episodes in Berserk 2017 is without a doubt in a far, far better place than its 2016 sibling was at the same stage in its run. Look past the CG and the simple matter of fact remains - this is still Berserk; still the same plot and characters and themes from one of (if not the) most acclaimed manga series of all time. In my rulebook, any Berserk anime is better than no Berserk anime at all.

You can currently watch Berserk in streaming form on Crunchyroll.

8
If you can look past the CG work, then this year’s Berserk offering is in a far stronger position than last year's effort.
LATEST REVIEWS