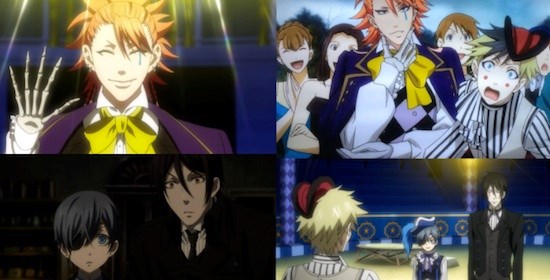 Since its manga debut in 2006, Yana Toboso’s Black Butler has remained one of the most enduringly popular properties of the last ten years. Take a dash of Downton Abbey’s upper crust period-drama hijinks and combine with the gothic master-and-servant thrills of Hellsing, and the result is a Victorian fantasia of the highest order, blending humour and seriousness with crisp professionalism.

But the series hasn’t been without its troubles - its first anime adaptation in 2008 started strongly, but frustrated many with its anime-original ending. This was further complicated by a second season in 2010 consisting of more anime original material which left fans with a bitter taste in their mouths yet again, despite some gloriously meta bonus OVAs which saw the anime’s cast re-imagined as modern-day actors ‘playing’ their roles in the series itself. Then came 2014’s badly judged live action effort, which saw fit to ditch the original’s Victorian England setting and change the sex of lead character Ciel from a boy to a girl.

Thankfully however, 2014 also gifted us a return to the manga’s ‘core’ storyline in the form of Book of Circus, which adapts the series’ Noah's Ark Circus arc faithfully. Like other recent shows such as Haikyu, this season of Black Butler is content to confine itself to ten episodes to simply tell a single, self-contained story. No more, and no less. In doing so, it achieves a distinct focus and clarity of storytelling that many other shows could learn a thing or two from.The sharpness and quality of Black Butler’s script has always been one of its defining trademarks, and never is that better realised than here.

The season is divided very clearly into three distinct segments: set-up, conflict and escalation, and finally, resolution. Telling the story of Ciel and Sebastian’s investigation into the connection between a travelling circus and a spate of child disappearances, we are gradually introduced to each of the performers in the circus troupe as the tone gradually shifts from one of carnivalesque jollity to one of brooding, sombre darkness. Through it all, the series maintains its streak for masterful characterisation; with many of the new characters just as vividly depicted as old regulars.

That said, the heart of Black Butler has always been the dynamic between Ciel and Sebastian - an old-timey comedy of manners, with master Ciel the straight-man to butler Sebastian’s machiavellian mischief. Through Book of Circus, we see ample opportunities for this dynamic to shine. Indeed, the first episode is essentially a kind of ‘Greatest Hits’ of Black Butler’s core tropes, capturing within twenty minutes all the comic tricks and dramatic ploys that make this series such a joy to watch. As Ciel and Sebastian confront a sleazy businessman, we see the action physically ‘rewound’ like a tape to reveal how the duo trump his assassination attempt - mirroring the likes of Baccano or the BBC’s Sherlock in this fourth-wall-breaking playfulness of telling a non-linear narrative.

Returning to the core narrative of the arc, if there are any faults to be found with Book of Circus it’s that it sags a little in the middle segments; spending a good few episodes to really get to the ‘meat’ of the matter and exposing the circus troupe’s true intentions. This, though, can be excused to a certain degree as - in allowing the story this space to breath - the wider melancholic tone is amplified, as is the surprisingly sympathetic treatment of the troupe members as antagonists. Indeed, by shading all its characters with moral greyness, Black Butler maintains a distinct thrill - keeping us on our toes as we’re made to questions whether anyone emerges as heroes or villains in this murky tale of Victorian melodrama and murder. Chief among this is the titular Black Butler himself - Sebastian - who we are plainly shown isn’t above gruesomely burning to death his opponents, or sexually exploiting a female member of the circus troupe when she is at her most vulnerable to extract the information he requires to further his investigation.

In terms of visual quality, Black Butler is very much typical of A1 Pictures’ standard look and feel. Never overtly fluid or extravagant in its animation quality, but maintaining a proficient workmanlike quality throughout. More impressive is the storyboarding and framing, which goes a long way to contributing to the feel of dusky Victorian melancholia. The soundtrack too remains wonderful - flitting between baroque, waltz-like melodies and folksy numbers befitting the circus setting.

On the question of voice acting, Black Butler is one of those series - that like the much-praised efforts with Baccano to replicate its period American setting - feels, for me at least, so much more at home with the English dub. While one might question the veracity of getting the good folks at Funimation to attempt British accents, for the most part the US cast manage to pull them off with aplomb. Special mention must go to Brina Palencia and J. Michael Tatum who reprise their roles as Ciel and Sebastian, respectively. These two have form for playing dynamic duos (chiefly their efforts as Holo and Lawrence in Spice & Wolf), and their work in Black Butler ranks as some of their best - reaffirming their status as two of Funimation’s strongest talents.

All in all, Book of Circus is a triumphant return to form for the Black Butler franchise, bringing it back in line with the original vision of the manga, as well as setting the stage for the movie outing Book of the Atlantic, which screened in Japan earlier this year (before hitting US cinemas this June). In its appropriation of all the very best parts of Victorian-esque intrigue and period detail, the series befits itself with a charm and humour that few others can match. As Clements and McCarthy put it in the Anime Encyclopedia: “However hard you try, America, you will never be able to parody Britain as slyly and subtly as the Japanese can. Only another country with more than a millennium of monarchy and a set of arcane, unwritten social rules could possibly understand us the way Black Butler does.”

English and Japanese stereo audio with English subtitles. Extras consist of English cast commentaries (including a video commentary for episode ten), and a selection of US trailers.

8
A thrilling return to form for the Black Butler franchise - revelling in all the best bits of Victorian melancholia and melodrama.
LATEST REVIEWS