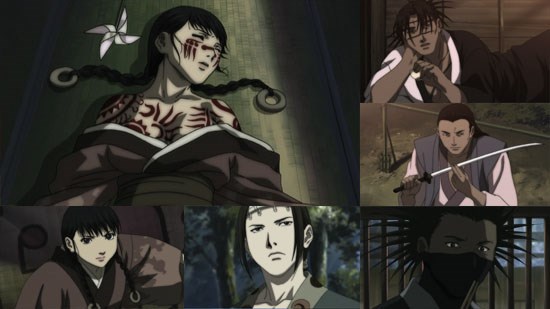 Blade of the Immortal Vol. 3

We’ve arrived at the final volume of the anime adaption of Blade of the Immortal, but are all bets off for this final confrontation?

As Rin and Manji continue with their plans against the Itto-Ryu, Rin encounters a boy who is the son of Kawakami, one of the men responsible for her parents’ death. But two years have proved to be a long time and Kawakami is far from the man he was, with the question being whether Rin will still carry out her vengeance.

If there is one thing that Blade of the Immortal has shown during its run, it's that the “eye for an eye” way of solving problems is not as clear-cut as many would believe. We have watched Rin on her path of vengeance and while it is easily argued that some of the pair’s adversaries are crazed maniacs there are questions about those that choose to live beyond the means of using the sword. The fact that Rin herself questions her chosen path does much to highlight that the characters in this series aren’t the heartless bastards we have come to see at times.

If there is anything that can be said about this final volume, it's that it doesn’t end in the typical way. Instead of what would normally be a climactic battle with blood flowing and limbs flying, what we get is a questioning of the practices of the era that the series is based in and the whos, whats and whys of what people do when they feel something is right. That for me is actually quite refreshing and adds some reasoning and thought behind the entire series - carving through legions of enemies isn’t always the answer to everything.

While the philosophy within the series isn’t in question, the actual entertainment value of the anime as a whole does need to be raised. The main annoyance has to be that the series ends with very little in the way of a conclusion. Granted the manga has not yet finished, but the fact that the anime ends with so much lingering makes it seem as though the show was destined to receive another series that didn’t see the light of day. This will no doubt annoy those that have been following the anime up until now, but with the high regard the manga is given, no doubt it should follow that those that enjoyed the anime should find their interest translated well over to the manga.

The last two episodes are somewhat muted and don't really give the send off that the series might actually deserve. Blade of the Immortal is by no means a bad series and going on what has been mentioned it does raise some thought-provoking questions. But as a samurai epic goes, it is anything but epic and while it might provide entertainment in one sitting, it is unlikely to be something you will watch repeatedly. Still, it is one of the better samurai series we have seen of late and we can’t question the message it is trying to push through.

The usual Japanese and English audio tracks, along with interviews with the series director and screen writer.

7
A somewhat muted end to the series, but its message does ring quite clearly through.
LATEST REVIEWS