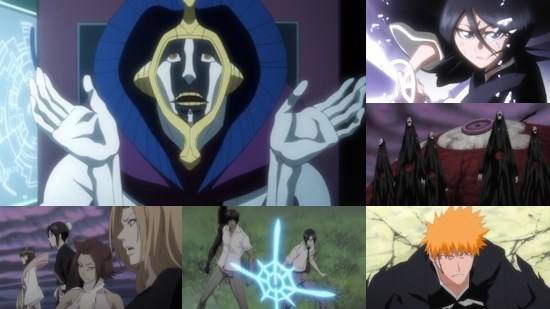 Although it arguably began to lose its footing as its previous volume progressed, the filler story arc which makes up Bleach's twelfth series has been a surprisingly impressive addition to the show's world and story-telling for the most part that has provided a fair few enjoyable moments as a result. But can it end with the same strength of ideas and narrative that it began with?

In short: no. Having set itself up for a grand finale at the end of part two, the mainstay of this Zanpakuto-focused story arc is concluded in surprisingly brief and simple fashion almost as soon as part three begins, as those Zanpakuto and their Soul Reaper counterparts join forces in the face of Muramasa's deception. Given all of its building up this moment, this comes to a close quickly enough to feel like rather an anti-climax, elongated a little into a final struggle between Muramasa and Ichigo that feels a little arbitrary and bolted-on to other events.

So, with that done and dusted, where does the rest of this volume head in the name of entertainment? The answer is a number of mostly episodic tales taking in some of the lesser Zanpakuto now branded as branded as "sword beasts" that are still on the loose in the wake of Muramasa's plot. Of course, it's up to the Soul Reapers, now working alongside their Zanpakuto who continue to exist in human form, to tidy up the variety of issues that surround these often violent Sword Beasts to prevent them from running amok.

Aside from feeling tacked on to the end of the main thrust of this filler arc, the main issue with this choice is that none of these subsequent episodes are particularly good - there are little moments of promise here and there, but generally speaking of all of these stories are either predictable, poorly paced, outright boring or some combination of the three. It's a decidedly weak end that reduces the impact of the good ideas which made the start of this arc so entertaining, and even the character designs of the Sword Beasts within these episodes feel half-baked and without the care and attention of the main Zanpakuto.

Beyond its narrative, these episodes are pretty much everything you'd expect from Bleach in terms of animation quality - variable but with the odd stand-out moment - and voice acting from both English and Japanese voice casts, and we have no complains about the content and quality of the discs themselves, so there's nothing to note from this perspective.

Taken as a whole, we'd still suggest that the "Zanpakuto: The Alternate Tale" has provided some of the better fare we've seen in Bleach of late, and its first two volumes are certainly filled with action and smart character designs based around an interesting, well thought-out premise that makes it well worth watching if you're a fan of the series. Sadly, once the mainstay of that story is concluded early in this volume there's really nothing left to recommend it, making for a hugely disappointing climax to what is otherwise the brightest piece of filler material that this franchise has brought us.

5
Once the main thrust of its story is over, this arc outstays its welcome massively throughout almost the entirety of this volume. A very disappointing end to a previously entertaining tale.
LATEST REVIEWS