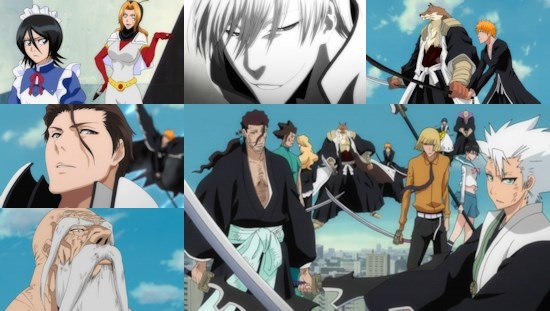 Having held a place as a permanent fixture in the UK anime release calendar for what seems like forever (but is in fact the case since 2007, which is more or less the same thing), each new release of Bleach brings the realisation that we're creeping ever-closer to its ending. This is particularly the case with this first volume of series fourteen, that continues to focus (for the most part) upon the meat of its plot while also advancing said story notably.

Thus, these episodes bring us to a pivotal moment that we seem to have been waiting for for a long time - a face-off between Ichigo and Aizen. Then again, tackling this malicious mastermind alone would be sheer insanity, so thankfully our hero has plenty of friends and comrades willing to put themselves in harm's way in the hope of turning the tide in their favour. Such is the severity of the situation that even the Head Captain of the Soul Reapers is willing to put in an appearance and demonstrate the full extent of his powers - but is even this enough to prevent Aizen from achieving his goals?

That, of course, is a question to be answered another day, although the delay in receiving this answer is at least in some small part due to the presence of some poorly placed filler across this volume. Although full filler story arcs can be frustrating in their own way, this particular volume is even more aggravating as random episodes pop up here and there in the thick of things to offer frivolous (and frankly pretty stupid) one-shot stories simply to buy time before the next "proper" instalment.

The real shame of these interruptions is that they massively break the flow and tension of the story as it stands at this juncture - one minute you're watching a life or death battle between major characters, then next the cast are flouncing around in costumes and goofing off. It's a jarring switch which occurs on several occasions, and its presence is a shame as the core of the episodes presented here are pretty good - the amount of recaps and reminders leaves you suspecting that you might not be getting your money's worth overall, but the meat of the series remains an enjoyable mixture of the typical shounen trappings that fans will be very familiar with at this point in time.

Thus, this volume of the series is an example of Bleach at its best and worst - there are some enjoyable twists and action scenes on the one hand, but on the other its original filler material is utterly atrocious. That the latter actively spoils the former in terms of its timing and placement is the real travesty here, although at least on DVD you can skip the offending episodes without too much difficulty.

Speaking of this DVD release, you probably know the drill by now - we have no complaints with its subtitles, its English dub remains enjoyably proficient, and video quality is perfectly acceptable. In short, everything is present and correct here, leaving us with no cause for complaint.

Now that the show is almost over (for now, at least) and dubbing of the final episodes is completed, the time is approaching to say goodbye to Bleach - there are certainly elements on show across these discs that we won't be sorry to see the back of, but if you're a long-standing fan then there continues to be just enough to keep you on-board as we edge towards the end of this anime adaptation.

6
The volume's best moments are diluted by atrocious filler, flashbacks and recaps, but there remains just enough decent material to keep the fans on-board.
LATEST REVIEWS