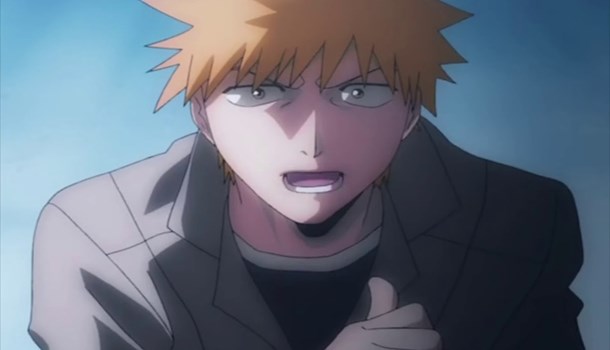 After a most excellent start to this action-packed series, it's time for us to grab our best black dressing gowns and play at being Soul Reapers once again. Or, if you prefer, we can just talk about the latest installment of Kurosaki Ichigo's adventures, courtesy of part two of Bleach's first series on DVD.

The climax of the first part of this series saw one of Ichigo's previously unnoticed classmates, Ishida, take centre stage, revealing himself to be the last surviving Quincy - A race wiped out by the Soul Reapers in the past, which not unnaturally has left young Ishida feeling a little aggrieved with any Shinigami he happens to meet. With Ichigo well and truly falling into this category, Ishida challenges him to a simple dual, luring as many Hollows into the vicinity as possible to see who can kill the most and prove their abilities as a saviour of the real world.

This being Bleach, what follows is a non-stop stream of high intensity action, as Ishida's plan gets out of hand, drawing many of Ichigo's friends unwittingly into their rivalry while also revealing to some of these previously bit-part players that they have some out of this world talents of their own. From here on in, things take a much darker turn, not least for Rukia, who finally has to face up to the consequences of transferring her Soul Reaper powers to Ichigo, a set of goings-on which in turn forces Ichigo down a most serious and dangerous path.

After lavishing the first set of Bleach DVDs with praise last time around, it's really rather difficult to act any differently with regard to the two-disc set under the microscope here. As with that offering, the eight episodes on show here (which takes us up to episode twenty in the grand scheme of things) keeps things moving at a suitably fast pace, while still finding time to linger on the more important moments and revelations that are sprinkled liberally throughout the series thus far. It's this linear yet well thought-out feeling of progression that helps to make Bleach one of those "just one more episode" anime series that you just can't help but keep watching. Sure, it isn't any kind of highbrow entertainment, but nor does it treat the viewer like an idiot, keeping the balance of fight sequences and more emotion and dialogue-driven moments perfectly balanced on that knife-edge where so many other series have failed.

I hate to come out with a straight comparison between this series so far and Naruto (which is really its closest cousin in style and planning), but I'm going to anyway - Bleach feels like a far more well-rounded, mature show to me. If I had to pick one series to spend my hard-earned cash on, Bleach would win every time. I know that's undoubtedly going to win me some hate-mail from the Naruto-loving populace out there, and don't get me wrong in thinking that I don't like both shows hugely, but for me Bleach just has that certain something that I simply can't resist. If you haven't dipped your toe into the world of Soul Reapers and Hollows yet - Try it. You're almost certain to enjoy every minute of it.