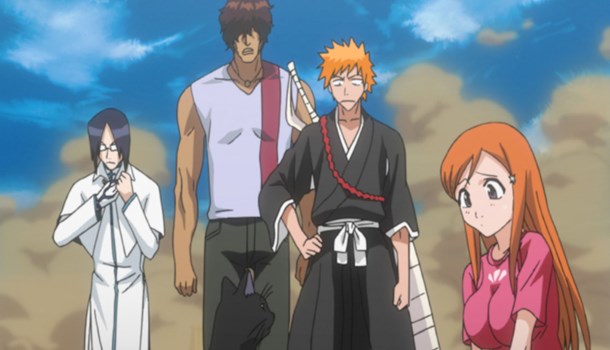 Ahhh, Bleach... How your predictable yet enjoyable blend of action leaves us all wanting to dye our hair orange and run around in a black dressing gown with a ridiculously large kitchen knife (Don't try this at home kids).  Or is it just me?  No, I thought not.

While I'd love to say that part two of series two kicks off from where the last rip-roaring instalment left off... It doesn't.  Instead we're left with what can only be described as a "filler" episode, returning us back to the real world and Ichigo's sisters, while the quite frankly rather irritating Don Kanonji returns to battle Hollows who are after some kind of spirit cat.  Okay, so it isn't quite as bad as it sounds, but if you were left on the edge of your seat by the last volume on DVD you'll be keen to get this out of the way as soon as possible.

Thankfully, with that episode gone we return to the main story arc for the remaining eight episodes spread across the two DVDs provided here, with Ichigo and friends continuing to fight their way to forward towards rescuing Rukia, with Ichigo's battle against Zaraki Kenpachi the real highlight of the piece.  Of course, it isn't all about Ichigo, so we also get to spend a fair amount of time with Chad, leading us to learn of his motivation and the development of his friendship with Ichigo, and we also get a bit more revelation (quite literally, if you get my meaning) about Yoruichi as well.

Away from (although naturally closely dovetailed to) Ichigo's mission, another major factor of the story includes the ever-thickening plot surrounding the various leading Soul Reaper squad members, whose in-fighting, sniping and back-stabbing takes a decidedly disturbing and violent turn, to set up some further room for intrigue as the series progresses.

By this juncture, I imagine we're probably preaching to the converted somewhat with our coverage of Bleach - Either you're hooked on the series or it simply isn't your thing.  Assuming that you have enjoyed the series so far, make it beyond that solitary "filler" episode and you'll be welcomed once again into a world of ridiculously over-the-top (yet also ridiculously fun) battles, a plethora of immensely cool major characters, and just enough plot and character development to keep your interest without bogging you down in complexities.  It's good, old-fashioned, simple fun in other words, and the kind of thing that makes Bleach a great anime to watch if you're just after some action to gawp at without ever pretending to be "deep".

8
A single below-par episode aside, this is another batch of sword-swinging, action-packed delight for fans of the series.
LATEST REVIEWS