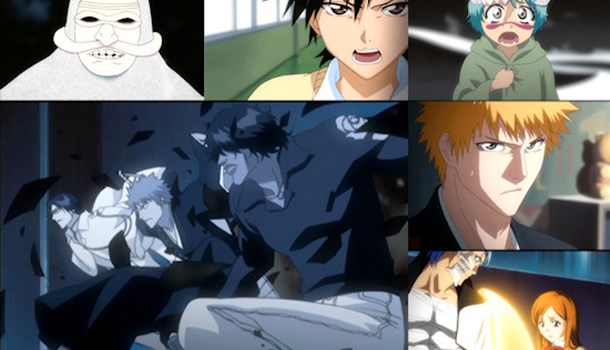 No sooner has the dust settled on the first half of Bleach's second season do we find ourselves faced with its second set of ten episodes - a break-neck pace of which the show's protagonist Ichigo Kurosaki would surely approve.

After traipsing through the barren desert which was some decidedly terrible filler episodes, the previous volume of Bleach finally swung into action as the main focus of its story shifted to Orihime as she finds herself at the centre of Aizen's attentions on account of her unique powers.  Despite surreptitiously saying her goodbyes to Ichigo before being taken to Hueco Mundo, it isn't long before both her friends and Soul Society notice her disappoint - however, while Ichigo is keen to go straight after his friend to rescue her, Soul Society has more pressing concerns given Aizen's plans.

Of course, Ichigo is hardly likely to shrug off suggestions to leave Inoue to her own devices in the hands of the enemy, and thus the majority of this second half of series seven sees him travelling to Hueco Mundo in his attempt to rescue Orihime.  Despite Soul Society's warnings, he doesn't travel alone, and during the course of these episodes he gathers a motley crew of friends, Soul Reapers and some errant Arrancar which end up tagging along for the trip.

Despite the promise of a new location for its action and some major opponents in the form of Aizen and his army of Espada, a few glaring flaws present themselves within this volume of Bleach.  For starters, you can't help feeling that the series has simply run out of good ideas for character designs, landing us with individuals that look like they were originally devised on the back of a napkin.  This in itself wouldn't be too bad if some of these characters weren't also incredibly irritating - young Arrancar Nel in particular hangs around much of this volume like a rather annoying stench, to the point where even the subtitles give up translating the running joke of his mispronunciation of Ichigo's name.  In fact, speaking of jokes, these episodes also try far too hard to infuse proceedings with humour, filling episodes with so much comedy that any illusions of dramatic tension are broken no matter what the scenario or relative peril of the moment.

Although these episodes move the series and its current arc forward to an important degree, you can't escape the feeling that the instalments on show here are largely little more than a warm-up act for the main course - they certainly don't treat their subject matter with any real deference, and it's only at the very end of this volume that things start to get dangerous for our heroes.  Hopefully that main course will be served up fresh and piping hot for Bleach's eighth series to assuage our concerns that this is simply a show that's fast running out of steam - it certainly has the potential to return to its bombastic best, it just needs to go out and do something with the possibilities inherent in its current story.

English 5.1 and Japanese 2.0 audio with English subtitles.  Extras are the norm for this series - textless ending credits, production art and trailers.

6
This latest volume of Bleach moves the story forward, but distils what it's trying to do via an over-reliance on humour and uninteresting distractions.
LATEST REVIEWS