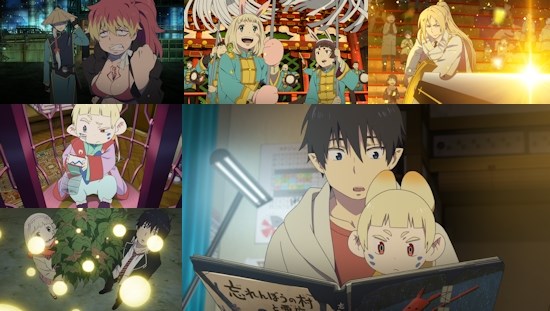 Following on from an anime adaptation which diverged heavily from its source material and wasn't as highly rated as it might otherwise have been as a result, Blue Exorcist returns for a big screen treatment that now nets itself a UK home video release after a number of theatrical screenings. Can the literal son of Satan make a splash when granted a feature-length movie budget?

The film sets its scene by way of an old folk tale about a demon who caused the destruction of the village in which it appeared; a tale related to the young Okumura brothers by their father whilst posing them the question of what they would do if they met the demon in question.

From these memories of Rin and Yukio's past we return to the present, and preparations for a grand festival in the city that sees its exorcists - and of course the students of True Cross - giving their all to ensure that the festival occurs without a hitch. Needless to say, the best-laid plans never come to bear easily, and this is particularly true when Rin Okumura is involved, as what should be the routine handling of a literal "ghost train" goes wrong when Rin and Shiemi decide upon trying to save its occupants. The result of this decision is utter chaos that does untold damage, leaving Yukio injured and Rin suspended for several days.

Perhaps the more important outcome of this botched mission is the appearance of a strange, almost feral young boy - it's clear that the youngster is a demon, but nobody is quite sure what to do with him, and thus Usamaro (as he comes to be known) is left in the housebound Rin's care. Once the two bond is seems as if this so-called demon is nothing but a nice but misunderstood kid - unfortunately, nobody seems to have realised the terrifying power which this diminutive demon wields.

One of the wonders of Blue Exorcist in both its manga and animated iterations is the beauty of the city within which the series is set - a sprawling blend of modernity and more classical stylings that never ceases to be eye-catching. Seemingly aware of this, the smartest thing that the Blue Exorcist movie does is to make the city itself the centrepiece of much of what goes on within it - from its occasionally spectacular opening set piece through to the building festival, many of the film's best visual moments come the way it practically treats the city as a character in its own right as events ebb and flow through its streets, facilities and even sewers.

Beyond this, the film is a very typical Shonen Jump movie - some big action set-pieces peppered throughout to drive forward an enjoyable standalone story that doesn't impinge upon the wider story of the series. There is a certainly amount of assumed knowledge that you'll require going into the film, but provided you know about Rin Okumura's situation and perhaps a little of his struggles through either the TV series or the manga you should be able to enjoy this offering without an exhaustive knowledge of prior material.

Despite that action, there's a real emotional core to the film that it seeks to explore - the relationship between Rin and Usamaro is charming and well-executed, and although it starts to meander a little towards its finale this in turn adds impact to the revelations that follow. In a sense, this is what sets the film apart from the typical Shonen Jump fare we just mentioned - there's no explicit "bad guy" here, which feels like a refreshing break from the normal black and white "good versus evil" battle we're used to seeing presented from this kind of movie.

If you're a fan of any of the show's supporting cast, your biggest disappointment will probably be that their supporting role is taken very literally here - Rin aside, almost every other character plays little more than a bit-part to further the plot whenever they're required before stepping back into the shadows to let Rin and Usamaro strut their stuff. Given that Blue Exorcist's wider cast of characters is one of its more enjoyable assets this is a bit of a shame, although it does help in giving a sharp focus to the story.

Aside from those beautifully rendered backgrounds, the likes of which you'll rarely see bettered, the rest of the film also enjoys a very obvious visual upgrade over the TV series throughout - character designs rarely stray off-model, and most of the animation is fluid and visually engaging with some excellent scenes beyond the typical stand-out action sequences. Those gorgeous backdrops alone make the film well worth picking up on Blu-Ray, but the overall visual package stands up to scrutiny too.

The movie's audio offering also does the job nicely too - although our Blu-Ray review disc unfathomably only uses standard lossy DTS instead of lossless DTS HD-MA for its audio tracks, this won't be a big deal for most and the film offers up some punchy audio punctuated by Hiroyuki Sawano's excellent score. Both English and Japanese voice casts do a good job of conveying the film's character and emotions, although the English dub does very occasionally feel a little flat and some of its pronunciations remain a little "off", as per the treatment of the TV series.  This UK release also boasts some fascinating commentary tracks featuring both the Japanese voice and production cast lending their thoughts to the creative process.

For fans of Blue Exorcist as a whole, this movie provides plenty to enjoy - its setting and the way that setting is utilised remains a delight even if much of the show's cast struggle to make their presence felt, and the use of its well-established world here is simply excellent. Beyond that, this isn't perhaps the kind of film that will live long in the memory, but it's a decidedly enjoyable slice of entertainment that avoids many of the more predictable elements of a typical shonen franchise spin-off movie and is all the better for it.

7
Beautiful backgrounds and a heartfelt story ensures that this is a film which rises above the usual shounen movie expectations.
LATEST REVIEWS