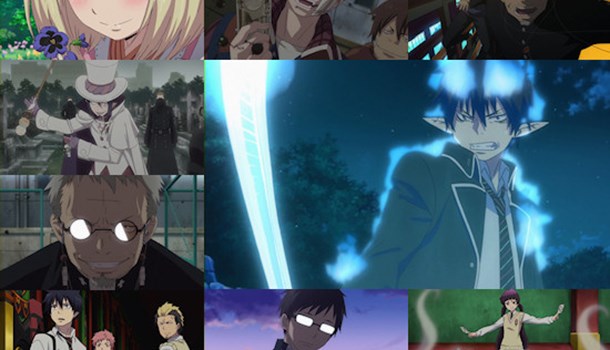 No matter how you slice it Rin Okumura, the protagonist of Blue Exorcist, looks a lot like your typical teenage delinquent - poorly educated, unable to hold down a job and with a quick-fire temper that gets him into almost endless scraps and scrapes he's quite the troublemaker, in stark contrast to his intelligent and well-spoken twin brother Yukio.

If this were a documentary, we'd probably be looking to blame Rin's family situation, poor schooling or the breakdown of society for his troubles, but in the case of Blue Exorcist a far more simple reason for this young lad's predilection for getting into trouble is soon revealed - Rin is none other than the bastard child of Satan.  As "daddy" arrives to stake a claim on his son with disastrous consequences for Rin's guardian and surrogate parent, the kindly Father Fujimoto, Rin decides that he has no intention of following in his father's footsteps, and before we know it this demon in human form as decided that he wants to take up the ultimate form of teenage rebellion - to become an exorcist and kill Satan himself.

Of course becoming an exorcist is no trivial task, especially when you're a much-feared demon who your average exorcist would rather slay than fight alongside, and thus Rin begins the long process of learning his new trade at True Cross Academy - think "Harry Potter with demons", only with that franchise's bespectacled wizard replaced with a genuine but short-tempered demon child who has to keep his true identity (and the blue flames which signify it) hidden at all costs.  Spectacular though the academy is however, this is a place where nothing is quite as it seems, and aside from getting to know his new classmates it soon becomes apparent that various forces in the background have wildly varying opinions on Rin's place in their world, meaning that he'll have to face up to dangerous threats far sooner than he could ever have imagined.

Based upon a hugely popular shounen manga, expectations are naturally high for this series, to the point where UK distributor Manga Entertainment has taken the unusual step of forgoing the normal wait for an English dub, choosing instead to release the series in a subtitle-only form.  But does the first half of this series impress to the same extent as its source material?  "Yes and no" is the unhelpful answer to that question.

First, the positives - A-1 Pictures' adaptation of Kazue Kato's manga succeeds in transferring the charm of its character roster from the printed page to the small screen, and it also does a fantastic job for the most part of presenting the occasionally jaw-dropping locations utilised by the series, not least True Cross Academy and its surrounding area.  The core story of the series up to this point is also delivered competently with all of its twists and turns intact, so fans of the manga will doubtless get a kick of seeing an animated adaptation of the story so far.

However, for all of these positives there's something almost indefinable that feels a little "off" about the series - its pacing during this first half is upset by a couple of needless filler episodes which disrupt the story unnecessarily (while a side-story actually present within the original manga is relegated to a bonus OVA episode included upon these DVDs), and somewhere along the line the move to the small screen has lost some of the passion, panache and emotion delivered by the manga.  Add in some clunky CG in places and variable animation quality as this first half of the series goes on, and you get the feeling that Blue Exorcist so far could, and perhaps should, have been more than it ultimately proves to be.  Then again, with even more compelling content to come, perhaps the second half of the series can build upon this solid but largely unspectacular start.

Given its subtitle-only release format (which has a pretty solid Japanese language track incidentally), our focus rests on the quality of those subtitles of course.  Frustratingly, there are a few missing lines from the subtitle track, and other occasions where spaces between words have missed out, but thankfully nothing that will entirely hole your viewing experience beneath the proverbial water.  Small quibbles aside the release as a whole is satisfyingly comprehensive, containing the show's OVA episode and a collection of some "Ura-Ex" comedy mini-episodes alongside the usual trailers and text-free credit sequences.  Video and audio quality is pretty decent for the most part, and probably bolstered by the disc space saved on each DVD by the lack of an English audio track.

At this half-way point in the series, Blue Exorcist has proved to be a solid adaptation of its source material - existing fans of the manga will enjoy seeing their favourite characters and settings transferred to the small screen, but all things considered there's more heart and energy to be found in the original work than is served up here, meaning that newcomers might best be served by taking in the manga first and foremost.  Still, even with this caveat Blue Exorcist feels like something of a breath of fresh air to anyone bored with Bleach or Naruto - it might not be the most original shounen series ever devised, but it has enough going for it to be an enjoyable distraction for fans of the genre.

Japanese stereo audio with English subtitle.  Extras consist of a bonus OVA episode, a series of comedy "Ura-Ex" skits, web previews for the series and textless opening and ending credits.

7
It lacks some of the energy and lure of the source material, but this first volume of Blue Exorcist is still largely an enjoyable romp.
LATEST REVIEWS