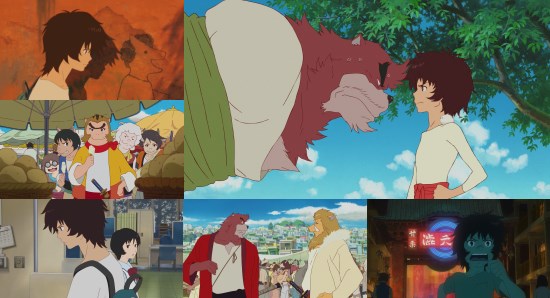 Boy and the Beast, The (Theatrical screening)

Having found an increasing level of success since the film which brought him to the world's attention in The Girl Who Leapt Through Time, Mamoru Hosoda has found himself at the forefront of the tiresome argument as to who the "next Miyazaki" might be (as a hint, there will be no "next Miyazaki", the suggestion that his creativity can simply be reproduced is a foolish one). Since Hayao Miyazaki's retirement that desire to label Hosoda as such has arguably reached fever pitch, to the point where we've seen traditional Studio Ghibli film distributor for the UK STUDIOCANAL pick up his latest work to bring to our shores.

The Boy and the Beast isn't a direct sequel to Hosoda's previous work Wolf Children in any sense, but thematically it continues a very clear throughline of its director and (for the first time) sole screenwriter's worries and thought processes as a father. While Wolf Children deals with the difficulties of bringing up young children in a safe and healthy environment, The Boy and the Beast is effectively concerned with the next stage of that process - teaching them the skills to get by in life, and what happens when your offspring surpass your own knowledge and understanding.

For the film's protagonist Ren, the prospect of having parents at all must seem a tantalising one - with an errant father following a divorce compounded by the death of his mother in a traffic accident he's suddenly left alone, with the only ones purporting to care about him more interested in his role as the heir to some kind of unspecified organisation rather than his needs as a young boy. Understandably for the emotional and outspoken kid, his launches into a tirade against these so-called "guardians" before fleeing into the Tokyo night.

For a nine year-old left all alone the streets of Shibuya are a dizzying and uneasy place to be, but even this doesn't prepare Ren for an encounter with a pair of beasts in disguise as they discuss the need for the larger of the two to take on a pupil. While this chance meeting leaves Ren frozen in fear and surprise, the threat of being taken into custody by police and returned to his unwelcoming "home" leads him to make a do or die situation and follow the strange creatures he's just sighted.

It's this decision which sees him almost literally tumble into Jutengai, the beast kingdom which is normally hidden from human sight. Seemingly with no way out, Ren's panic leads him straight into the clutches of the burly and brusque Kumatetsu, who spies an easy opportunity to fulfil his need to take on a pupil so that he might become the next lord of the land.

Although hardly enamoured of this turn of events, Ren - renamed Kyuta at Kumatetsu's whim - decides to go along with the plan, only to find his new teacher to be anything but effective as a trainer. Given that both Ren and Kumatetsu are equally boorish, it's no surprise that sparks fly and there's never a quiet moment in the relationship between the two, yet somehow in the midst of all this conflict some seeds of understanding blossom - Ren finds a desire to learn from his teacher, and Kumatetsu even finds himself discovering new aspects to his personality as a result of his charge. What initially seemed so tempestuous ultimately becomes a near-perfect symbiotic relationship - but can it survive Ren's move into puberty and a desire to discover the elements of his human life that it's missed for so long? Besides, what of Kumatetsu and his efforts to become the next lord of Jutengai?

Much like Wolf Children before it, The Boy and the Beast is at its best in telling an organic story of childhood and growing up - Ren's blend of smart observations and childish petulance is perfectly placed for an inquisitive nine year-old, and his drive to learn and explore throughout the film drives it onwards through what are effectively training montages through to a time skip and a return to the human world which brings with it a touch of romance and friendship to round things off. There's something genuinely joyous about watching Ren's mental growth as he adapts to circumstances and grows into an imperfect but driven and passionate young man, and similarly seeing Kumatetsu flourish as an unlikely surrogate father figure also helps to provide much of the emotional impact of the film's final act. You could argue that the development of these characters is overly idealised and perhaps even a little rushed, but it's a testament to the story itself that it never feels anything less than believable.

The film also has a sense of spectacle arguably only equalled within Hosoda's oeuvre by Summer Wars - the bustle, light and sound of Shibuya crossing that opens our view into the film's taken on the human world is incredibly well-realised, and Jutengai is also an enjoyable place to spend time within in its own well-imagined way. Character designs feel instantly familiar to anyone who has watched previous Hosoda films, but that's no bad thing and they all fit well into the world while offering no shortage of fluid and expressive animation. Taken as a whole, this is one seriously great-looking film.

There are some negatives that detract from this overall experience however. Perhaps the biggest misstep the film makes is a reveal that kicks off the finale of the film - this moment is so heavily telegraphed that it loses much of its impact, and while it seems to have been a deliberate decision not to hide the twist that is to come the whole thing is handled in a way that makes it feel more like a contrivance for the convenience of the plot than satisfactory in any way. Yes, it gives us a big finale with some spectacular visuals and action to go with it, but that doesn't stop it seeming at odds with the rest of the film and again adds to the occasional feeling that crops up throughout that the narrative is being rushed a little.

Another notable step down from Hosoda's previous works is the use of comedy within The Boy and the Beast - the visual gags and jokes are still present, but they almost all fall flat here in comparison to the director's previous works which all had a rich, well-worked and hugely enjoyable sense of humour to them. One suspects that the humour shown in those previous Hosoda works was actually born from screenwriter Satoko Okudera, and his absence here is keenly felt in this sense.

These detractions shouldn't obscure the fact that The Boy and the Beast is another heartfelt and entertaining movie from Mamoru Hosoda however - it's an engaging film to watch both visually and narratively, and in spite of its unusual world inhabited by beasts the story and characters are easy to relate to, whether that's as a parent or from your own childhood. In a sense, this is the real core of Hosoda's talent - there's almost a nostalgia to his storytelling, but one that gives us important reminders or teaches us life lessons that are no less valuable for that.

This is more than enough to make The Boy and the Beast a film that is undoubtedly well worth your time, and another fantastic addition to Mamoru Hosoda's filmography that leaves us keen to see what he has planned next.

8
Another enjoyable and easily relatable film from Mamoru Hosoda - not the pinnacle of his career, but a very good movie nonetheless.
LATEST REVIEWS