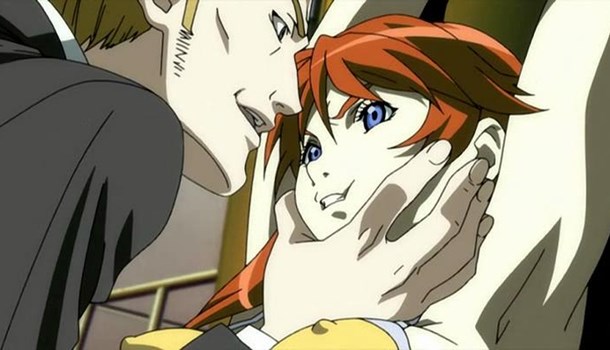 Since Stu hated this series with a passion, I decided to feast my lucky orbs and see what all the fuss was about. And whilst I don’t agree with everything Stu said, I can certainly see where he was coming from.

The first thing that struck me was the almost Western style of the animation. Don't let the nice screengrabs fool you, it looks cheap and slightly… off. However, the characters themselves were lively enough, and the character designs are fetching.

That said, the storylines across these two volumes are pretty tame. The trailer shows us brutal criminals put down through brutal methods, and I expected something along the lines of Cyber City Oedo in terms of sheer brutality, but it plays very much like another ensemble teen show. I didn’t see much here that would look out of place in Winx Club or any other Saturday morning kids show.

The episodes across these two discs vary from stand alone (and, if I’m honest, vacuous) tales, to arc based stories that throw together threads about giant mutant insects and gangland bosses. One of the most unusual episodes is a bizarre series of events that sees Amy, the precocious and bratty computer hacker, targeted by a bunch of individuals who have given up their bodies and now live on the ‘net (shades of Lain, anyone?). It’s absurd, but that just makes it stand out. It is a pretty weak bunch of episodes, and by the end of the 2 disc run, I was bored witless.

I don’t object to this series because of the production values (bad as they are) but the trite ideas and weak storytelling. Every stereotype is ticked (calm, collected older sister figure, quiet ass-kicking type, vacuous WASP character and bratty pre-teen. Oh, and the usual hapless male character who loses all trace of sentient thought when surrounded by boobies). I’m starting to think feminism has gone too far lads – when was the last time we saw an anime with a team of guys kicking ass? Dragonball Z?

So here it is – the last chicken in the shop. Totally outgunned by almost any other anime you care to mention, this anime-lite is the sort of thing you dread Aunt Erma putting in your Christmas stocking. Just remember, she means well…
3
Weak, watery and pointless. Even the music sucks.