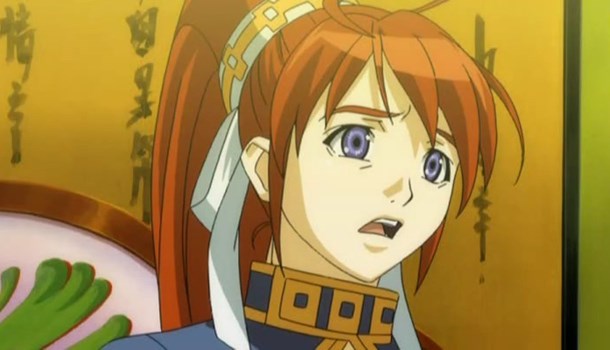 I think it’s fair to say that Burst Angel isn’t a series that has produced critical acclaim from this site thus far, and thus I find myself stepping up to the plate to review volume five of the show as the fourth reviewer of this tale of guns, girls and giant robots. So, can I find something to love that the others couldn’t see?

Volume five kicks off with a resolution to the last disc's cliff-hanger, with tough-as-nails Jo left to take on some heavily armoured Cybot with nothing but a couple of guns and a mute samurai (I kid you not!) for company. From then on, we meander through a handful of stories on the disc (four episodes, to be precise) which vary between stand-alone efforts and those focusing more prominently on the main story arc, where we slowly begin to piece together the origins of Jo and her mysterious past.

Much like the rest of the series, the episodes present in volume five aren’t particularly terrible per se, but by the same token they aren’t exactly works of genius either. Despite being set in a dystopian future, certain aspects of the plot line just don’t seem plausible, venturing into somewhat ridiculous territories in an effort to advance the storyline and provide something exciting. Even when the plot does hold genuine potential, the writers seem to handle it with all the subtlety of a pre-teen. The final episode on the disc is a perfect example of this – Tokyo’s police force, RAPT, unveils new Cybots to deal with traffic policing, but one of them quickly goes somewhat berserk and starts attacking (relatively) innocent drivers with gusto. The episode alludes to the brain transferred from a living person into the crazy Cybot having undergone a rather hefty trauma, but this is never really explored beyond a couple of vague flashbacks, with the villain of the piece ending up being just another bit of eye candy as it’s blown to pieces by Jo and the gang’s mecha, Jango.

Which really brings us to the crux of the series – It isn’t trying to make a point or get you thinking, it’s simply a bunch of scantily-clad girls blowing things up. Unfortunately, even this aim is rather deadened by the use of some very bland CGI, rather uninspired mecha designs and generally very little in the way of top-notch animation. The characterisation is very weak as well, leaving us in no danger of falling for or empathising with any of our heroes – Indeed, I’m still trying to figure out what Meg’s place is in the group at all (big breasts aside), beyond being kidnapped in almost every episode.

At the end of the day then, Burst Angel really is a case of anime-lite – Light, that is, on anything resembling an intense storyline, plot or characterisation. Throw that together with the generally poor animation and CG on offer, and you have yourself a pretty weak series. Having said that though, you could certainly find far less watchable shows out there, and if you desperately want to park your brain in neutral for a few hours then Burst Angel is probably as good an anime to do it to as any. Does that alone make it worth buying on DVD though? Well… No, it doesn’t.

The one positive facet of the DVD is the impressive amount of extras on show – Aside from both Japanese and English 5.1 audio tracks (Avoid the English dub at all costs, almost the entire cast sounds bored to tears!) and English subtitles, we are also treated to a commentary of episode seventeen (complete with constantly giggling Monica Rial, voice of Jo in the dub of the show), a number of radio dramas complete with English subtitles and brief interviews with one of the shows CGI artists and its character designer along with a number of the series’ Japanese voice actors. Most of these interviews are brief, but are good to get a flavour of the people working on the show. Throw in a couple of trailers for other series (Tenjho Tenje and Gantz) and you’re all set.
4
A weak series in every sense of the word.
LATEST REVIEWS