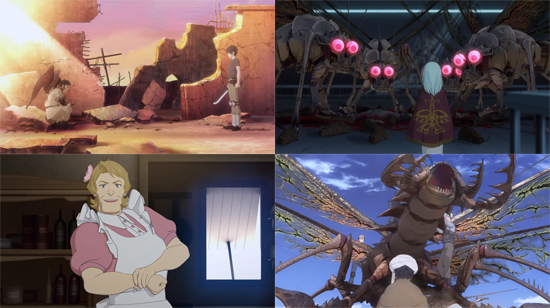 Cagaster of an Insect Cage

We’ve all heard about the Three-Episode Rule, right? It’s something that us UK Anime Network reviewers often abide by – if we’re giving first impressions rather than a full review of a series, we will still have to watch the first three episodes before saying what we feel, to allow time for the show to complete its set up and settle into its groove. Similarly, ordinary viewers are still advised to stick around for three episodes before being able to honestly say that they’ve given a show a fair shake and make a properly informed decision on whether they’re going to drop it or carry on watching to see the series through.

The Three-Episode Rule is a resilient guideline which keeps getting passed around forums and anime communities to this day, and it’s stuck around for so long simply because it’s a reasonable and effective rule. I abide by it myself, and there’ve only been a scant handful of occasions when I’ve felt prepared to dismiss a show without letting that opening trio play out fully. Many years ago when reviewing The Pilot’s Love Song I pegged the show for a stultifying formulaic slog right from the very first scene – I would have dropped it immediately if not for the sake of the review – but ever since then that’s honestly never happened… until today.

Cagaster of an Insect Cage is set in a future Earth where civilisation has been ravaged by a strange, alien plague. People can suddenly transform, as giant insects erupt out of their bodies like gory split chrysalises. These giant bugs, the Cagasters, are violent and aggressive and destroy everything around them, and as the plague has spread across the world massive swarms of Cagasters have consumed vast swathes of the planet. Even in these desperate times though humanity still endures, protected by fortified cities while “Exterminator” bounty hunters fight off packs of Cagasters and also put down half-transformed civilians, a gruesome but necessary task which, despite the danger Cagasters pose, most ordinary civilians still baulk at. One such Exterminator is Kidow, a sullen, taciturn young man borne down with the weight of old sorrows. While accompanying a scavenging merchant picking through the wastelands for intact artefacts to sell, he intervenes to protect a jeep which is being chased by Cagasters. The driver is killed in the battle but with his dying breath he pleads for Kidow to take his daughter, Ilie, to her mother. Kidow reluctantly agrees and brings Ilie back to the city with him, but with this simple delivery job he’s unwittingly opened a Pandora’s Box because the pair weren’t just running from the Cagasters and Ilie herself might unsuspectingly hold the secrets to the origins of the plague and mysteries of the Insect Cage.

Okay, the synopsis might not sound too ambitious and fairly straightforward but it comes across as a solid-enough post-apocalyptic sci-fi action-adventure romp, doesn’t it? What’s the big problem then? Well, it took me a couple of minutes to dismiss The Pilot’s Love Song, but Cagaster of an Insect Cage lost me in less than thirty seconds.

The first episode opens with footage of the initial Cagaster outbreak. A swarm of giant insects smash a passenger jet out of the sky. People in the city scream and flee in terror as the hulking gnashing bugs sweep down over them…

…and they’ve got googly eyes.

No, you read that right. Googly eyes. These horrifying grotesque monstrosities that are bringing the world to its knees and are almost impossible to destroy and spread death and misery wherever they go, have googly eyes. The same sort of cartoon accessories that wobble on the end of fuzzy novelties you buy in cheap kid’s party bags. Big ol’ giant gogglin’ bogglin’ googly eyes.

Is… is this, uh, like, um, a cultural-differences thing? Do googly eyes mean something else to the Japanese, like the Penny Arcade cartoon that speculated that Solid Snake’s geriatric moustache in Metal Gear Solid 4: Guns of the Patriots came across to them as a badass commando instead of a maths teacher? That’s as charitable an interpretation as I can give you as I absolutely cannot take the threat of these bugs seriously when they goggle at you so clowningly.

The only rational explanation for this toweringly idiotic presentation is that the designers possibly thought it would be creepy, the juxtaposition of the silly and the savage preying on the viewer’s fears and disgust: in which case, you can only further denounce them for their incompetence. Creepiness works when the threat is insidious, a camouflage to disguise the evil lurking within, sprung to strike like the childlike demons in The Shining. Evil clowns are a mocked cliché but back when monsters like Pennywise were new and seminal they were threatening because they were personal, their outward pleasantness lurched straight into your face. Cagaster of an Insect Cage clearly does not understand that there’s nothing particularly subtle or personal about a creature ripped straight from a Fifties matinee like It Came From The Desert flicking away battle-tanks like tiddlywinks. It’s a shame, because the actual insects which these googly eyes have been needlessly stapled onto actually don’t look too bad – they look suitably gribbly with harsh, dirty chitin and could have been fine on their own, and there’s a certain macabre fantasy to seeing the Cagasters start to emerge from human bodies. Even the show itself seems to realise the mistake that it has made, as around episodes three to six Cagasters start appearing which don’t have the fatal googly eyes, but then they start popping back in in the second half so it seems more accidental than actual self-awareness.

Okay, so, Cagaster of an Insect Cage can at least claim the dubious achievement of setting the land speed record for bad first impressions, but can the rest of the story recover from that early wobble? Maybe it could have worked if the show had knowingly embraced the absurdity of the B-movie silliness of its googly-eyed monsters and ramped up the camp, like an anime version of the Earth Defence Force videogames. Cagaster of an Insect Cage however turns out to be the absolute worst stereotype of an edgy teen fanfic, desperate for you to take this stupid weeaboo creature feature seriously as if it really believes scenes like Kidow’s mentor ranting about losing his faith make it a genuine affecting human drama. Kidow himself is sullen, moody, every inch the Coldsteel The Hedgehog hormonal teenager of an original-character-donut-steel protagonist. Exterminators are immensely powerful but despite the fact that they’re the first line of defence against a global existential threat, they’re widely resented and hated by the people, because of course they are. There’s also more of the lazy worldbuilding of the ‘cosy catastrophe’ vein, like in Chrome Shelled Regios where it’s supposedly a post-apocalyptic world but no-one suffers from scarcity.

The production is also appallingly cheap. I mentioned the cheapness of Polygon Pictures before in my review of the Drifting Dragons anime, how the studio often comes across as the Roger Corman of the anime industry. Sometimes they work efficiently and manage to do a lot with a little, such as with Difting Dragons itself – but here they clearly just dashed it off with a lack of care. Character models are stiff with rubbery textures, and even the main lead principals will just stare unblinking during long dialogues. Background characters are rigid still mannequins – other diners in a restaurant scene don’t do so much as lift their fork up and down like an animatronic, something that 3D is supposed to enable – and so little effort was put into character design that they couldn’t even be bothered to design alternative costumes for any of the cast (Ilie’s guardian Griffith goes shepherding while wearing an office suit), and Mario…

Kidow’s landlord is a transvestite, but the way the anime depicts this is crude in the extreme. Not so much in terms of actual character, he’s not the butt of any transexual jibes, but his character model is diabolically bad. It’s as if the 3D modeller was given the task to make him distinct from the other characters, then he fiddled with the vertex function for a couple of minutes to give him a blocky hernia of a chin that belong more in the “Money for Nothing” music video (the screenshot above doesn’t do it justice, watch him try to work his jaw and you’d think he escaped from a Chuck-E-Cheese display), shrugged his shoulders, tagged “will this do?” on the production notes then bunked off down the pub.

Does the show do anything right? The vaguely Middle-Eastern setting in which much of the anime takes place is a relatively unusual one for anime, and there are a few attractive sunsets among the desert backdrops. There are a couple of decent action scenes with more pro-active camera movement, such as an early one in episode two as it spins around soldiers defending a tank turret or another in episode four where it chases a bullet into a Cagaster’s maw. There are some genuine stakes when the characters visit the “Insect Cage” to learn Ilie’s origins, although the constant cutting-back to another battle in the city feels acutely like padding. Any energy the fighting injects into the story though is too little, too late.

There’s no reason at all to watch Cagaster of an Insect Cage other than to briefly chuckle at the googly bugs and then move on. It feels utterly redundant when the Netflix catalogue has an alternative that outclasses it, Last Hope. I’m not a great fan of Last Hope, mainly because it’s a Chinese anime and seeing Winnie the Pooh’s cultural outriders steadily encroach on the medium sticks in my craw, but despite that in honest objective analysis I have to admit that Last Hope does do the isolated post-apocalyptic desert setting a lot better, with nicer-looking monsters, action, and moreover, actual production values. Cagaster of an Insect Cage by contrast is dreary, weary, sawdusty schedule-filler. I’ve always preferred to have physical copies of anime – I don’t want to trust my favourite shows to the impermanence of a streaming license – but this is one I won’t miss when it drops off Netflix.

3
The bugs in this show couldn't ruin a picnic.