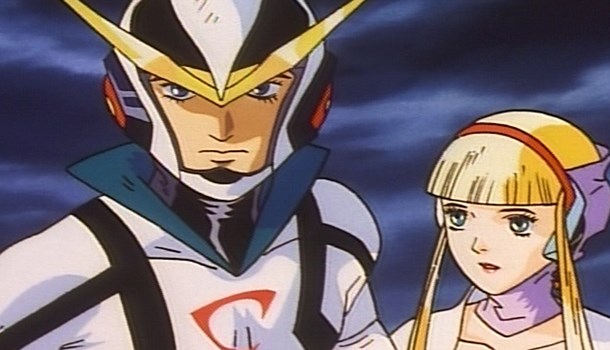 The 1993 OAV finally lands in the UK courtesy of Manga Entertainment, whose comprehensive package includes both English language "feature film" edited by Carl Macek, and the Japanese language version, with each OAV split into it's component parts.

The story centres around a ruined Earth, overrun by machines lead by the Black King who has defeated mankind and uses them for slave labour. Out of this wasteland comes a lone hero, the part man, part machine Neoroid known as Casshan.

The four OAV's (or edited together film if you watch the dub) follows Casshan as he fights his way across the world in his attempt to find and defeat the Black King and release humanity from bondage. Based on the 70's TV show of the same name (and a sequel of sorts), all the classic Casshan elements are in place - his canine companion, Friender, the Swan-mech Swanee and all the daft poses you'd expect from an action anime based on a 70's original.

As a 90's anime, it lacks the modern CGI touches we've become used to, and the designs are certainly dated - the robots wear clothes and display more human characteristics than most of the humans, but it does radiate a certain cheesy charm. The storyline jumps about a bit (especially the feature film version) but so long as you're prepared to be forgiving, you'll find an enjoyable romp with lots of action and some decent fight scenes.

This isn't enough to make it a classic of course - as a film, or OAV, it's strictly average fare. However, it gains some points for the informative and chatty commentary track by Jonathan Clements. As you'd expect from a man who co-wrote an anime encyclopedia, his insights are well-informed and delivered in such a way as to make the film less of a mediocre action yarn and more of a case study in Japanese remakes. This feature alone makes the disc worth picking up, especially if you want to know more about the processes behind the Japanese anime industry and those who work within it.

7
Gains a few points for the excellent commentary, but as a remake it's strictly average.