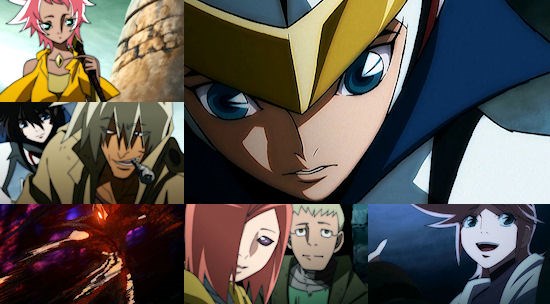 The titular protagonist of Casshern Sins behaves like a man who carries the weight of the entire world on his shoulders - in this particular case however it seems as though he's fully entitled to, with Casshern himself singularly fingered as the cause of the on-going destruction to all life on the planet in this reboot of the 1970s anime Neo-Human Casshern animated by Madhouse.

As for Casshern himself, he can remember nothing of his past or even his identity and whether he's a human or a robot - all he knows is that he now roams this crumbling world with an immortal body while others die all around him, albeit frequently not before informing Casshern that it was he who killed Luna; "the sun named after the moon" as she is known, and the girl who granted and maintained life on the planet before her brutal death at his hands.  As if this isn't bad enough, rumours persist that anyone who kills and devours Casshern will be saved from "Ruin", the name given to the disease which is destroying all and sundry, and granted immortality themselves - a rumour which sees Casshern regularly having to fight off swarms of desperate robots who quite literally want a piece of him to prolong their lives.  Add to that a female robot who is out for revenge against her sister who also seemingly died at Casshern's hands, and it's safe to say that the guy rarely gets a break.

While this first half of Casshern Sins progresses its main themes and story throughout, most of its episodes up to this point can also be treated to some extent as episodic, standalone pieces, with Casshern meeting various characters who bring with them their own unique take and circumstances in the face of the Ruin.  These encounters really build around the central theme of the series - what it is to live, what it is to die, and how the two polar opposite states mesh together to create a more potent, deep-seated experience of life.  This is particularly important given that the characters in the series largely consist of robots - humans are few and far between in Casshern's world, while robots who previously had no fear of death now cling in terror to what little life essence they have left as they learn for the first time how it feels to be on the brink of eternal nothingness.  Some robots embrace death as a new inevitability or even a necessity, while others rail against it with violence or the hunt for a solution and some groups cling to what could almost be termed as religions in the show's lexicon - few who come into contact with Casshern seem to be introduced to anything more than despair however.

If you haven't guessed by this point, Casshern Sins is one bleak, dark anime series - there's no real room for frivolity or humour here as the show's entire focus is on dragging you into its experience of a world on the precipice of slow, agonising extinction.  This atmosphere even extends through to the show's art style, a unique affair which could be politely described as retro and minimalist, or in less polite terms could be classed as downright ugly.  Love it or hate it, the muted palettes and simplicity of the artwork serves to draw you further into its world of utter despair, while its sleek and fluid lines actually come to the fore in the action set pieces which crop up quite frequently and allow for some expressive fight sequences which deserve some appreciation in their own right.  These visuals are backed up by a soundtrack which has an equally fragile beauty to it at times, adding yet another layer to this apocalyptic world without becoming over-bearing.

In technical terms, Manga Entertainment's DVD treatment of the series thus far is a solid one - there are a couple of spelling mistakes and one or two arguable points of translation, but generally speaking it's a pleasing release that gets all of its major requirements right.

To call this first part of Casshern Sins a tough offering to watch is an understatement, yet at the same time it shouldn't necessarily be taken as a criticism of the series by any stretch of the imagination.  Here is an anime that is deliberately trying to draw you into its mind-set so that you can understand the feelings of each and every one of its characters - not just Casshern himself, but the individuals he meets along the way no matter how fleetingly.  Broadly speaking, Casshern Sins succeeds in this regard, even if it does occasionally throw too many misery-laced eggs into its despair pudding to the point where you have to laugh at it for the moment to avoid the only other possibility open to you, that being a phone call to the Samaritans.

If you like to see the contemplation of life's big questions - the "why?" and "what's the point?" kind of open-ended ponderances - then Casshern Sins will give you plenty of food for thought indeed.  It would be wrong to simply label it as "highbrow" as the way it positions and progresses its story is anything but, yet it's undoubtedly high concept - if your preference is for watching anime that takes time out to lighten its tone, or indeed you need stunning, colourful visuals to suck you in, Casshern Sins probably won't be able to draw you into its world.  Personally, I found myself fascinated by Casshern's world almost from the very start, but boy do I need a stiff drink after a long session of watching the series so far.  This is one anime series that you shouldn't ever consider watching as a "pick me up" after a tough week in the office.

English and Japanese audio, English subtitles.  Despite spreading its twelve episodes over three discs on DVD, the only extras on show here are textless opening and ending credits and a short (yet worth checking out) music featurette.

7
It's bleak, dark and almost sadistically depressing, but Casshern Sins catches the eye with unique visuals and a high concept approach to its story.
LATEST REVIEWS