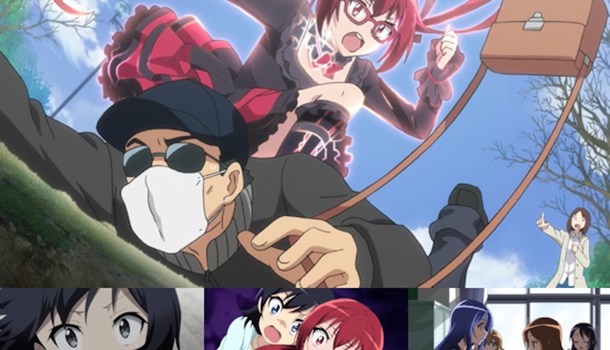 The early episodes of Castle Town Dandelion seemed to succeed in achieving the ideal desired by its protagonist, Akane - a desire to blend in and be forgotten by all and sundry rather than face the embarrassment of watching eyes. To be frank, there really wasn't anything memorable about the opening four episodes of the show which we reviewed previously, as beyond some repetitive gags there really wasn't much noteworthy to speak of. Now the series has come to an end however, do we have more to say about Castle Town Dandelion? Yes we do, at least in part.

For the most part, the show's origins as a four-panel comedy manga remain obvious throughout - episodes are broken down into multiple sub-stories which, although they are part of a greater whole, have largely self-contained elements as their focus. If we're being honest, the comedy angle of the series is decidedly lacking, and although it may raise the odd smile here and there it isn't exactly going to have you rolling on the floor.

Oddly enough given its source material, it's actually in terms of character development and characterisation that Castle Town Dandelion's story pays off. Having set out its stall around this royal family and its super-powered siblings competing to be voted the new king, the rest of the series manages to find some time to dig a little deeper beneath the surface of some of the cast, exploring more comprehensively why they do (or don't) want to become the next monarch and how these feelings shift based on their interactions with others. Although these efforts are also very much hit-and-miss, there are some minor gems and sweet moments scattered throughout the series - the story of how the current king and queen met is fun and adorable, and a few of their children get interesting stories that not only flesh out their characters but also tie neatly into their abilities in a satisfying way.

Unfortunately, for every sibling that gets their story fleshed out, another's is wasted - Akane is a surprisingly boring lead in narrative terms who is really just everyone's comic foil, while Hikari is turned into the inevitable idol character in an attempt to pander to the audience and no doubt knock out a few character singles to bring in extra cash into the bargain. It leaves us feeling like this is a series born out of some good ideas, but produced and advanced with little idea of how to make the best possible use of its scenario and cast. Occasionally it stumbles onto something good and makes it work, before staggering off in another far less fruitful direction. Admittedly it ultimately offers a satisfying finale to the series, but that's assuming you manage to make it that far in the first place.

Beyond its story and content, everything else about Castle Town Dandelion remains workmanlike - its animation is passable but never particularly striking (and seems to put the most effort into its rare idol concert scenes), the voice cast do the job nicely without ever stepping out of their comfort zones, and everything about the show screams "average" at you as its elements combine into a forgettable package.

Thus, we're left with a series that won't live long in the memory - it's perfectly okay as a throwaway streaming show to watch on a rainy day, but its rare highlights only serve as a reminder that there are some good ideas and characters that are wasted by a story that frequently doesn't seem to know what to do with them and instead relies upon predictable comedy that itself never hits the mark. Taken as a whole it certainly improves upon its initial episodes, but not by much.

You can currently watch Castle Town Dandelion in streaming form on Viewster.

6
Its no weed, but it's hardly a blossoming, beautiful flower either.
LATEST REVIEWS