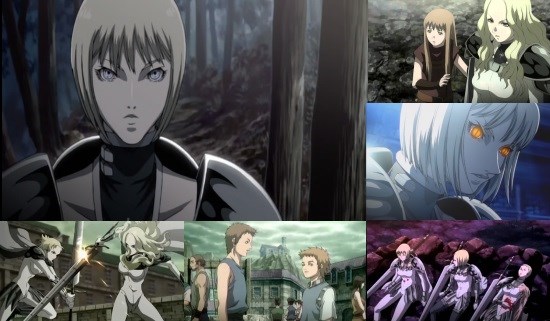 It’s been ten years since Madhouse’s adaptation of popular Shonen Jump manga Claymore aired but now, thanks to Anime Limited, it's finally back in the UK with a Blu-ray transfer to boot.  But a decade can be an eternity for an anime series and so now we’ll have to see if this series can still hold its own against its more modern contemporaries.

In the dark fantasy world of Claymore, humans are in constant peril of becoming prey for the demonic yoma – creatures fully capable of disguising themselves as human before striking out with a savage lust for human guts. The only protectors mankind has are the half-human, half-yoma silver-eyed witches called Claymores. These powerful fighting women wage a constant war against the yoma - both those attacking humans and the ones that live within them. Clare, an apparently young Claymore, finds herself travelling with a young human boy Raki as she attempts to cleave a bloody path through the yoma ranks in a series of missions that will change the both of them and possibly not for the better, as they come up against horrifically powerful enemies and even the highest echelons of the Claymores themselves.

Oddly enough the thing that really makes Claymore stand out nowadays is Berserk’s recent revivals. Both shows have broadly similar settings and are suitably heavy in the super-human versus demons department but thanks to Berserk's recent film and TV misfires Claymore, despite its age, really shines in comparison and it’s not like there have been any other big players in this genre recently either. The plot is largely straightforward with few surprises, but generally maintains its pace and moves you from action scene to action scene at a decent clip whilst allowing you to catch your breath at appropriate intervals along the way. Oh boy what action scenes they are too!  In fact, once you get past the opening few episodes which are far too reliant on having the action occur so fast that they don’t have to bother animating it all that much, the team behind the series lead by Hioyuki Tanaka (who went on to work on the likes of Hellsing Ultimate and Attack on Titan) really finds its feet and produces some really fantastic and fun sequences, especially once the show ditches the straightforward swordplay and brings in the individual special powers of the Claymore’s into the mix.

If there’s a problem with the show (apart from a very disappointing original ending which many believe to be the reason why the show never got a much-deserved second season) it’s one that springs from the pages of the manga in the form of Clare’s human sidekick Raki. Now, it’s completely understandable that they’d include the character as he’s in the manga and the purpose of the character is evident – Clare's rather taciturn when left to her own devices and you need someone to play off her in order for her to start giving out all the much-needed exposition in the early running of the series. Sadly however Raki is one of the most hatefully annoying characters you’ll have seen in a long while. He’s whiney, gets in the way of the plot and frankly by the time you’re a few episodes in you’ll have had more than enough. During the final ‘proper’ arc of the show you’ll likely be incandescent with rage as the show constantly interrupts its huge, brilliant set piece battle featuring a whole army of Claymores in order to go and see Raki sitting round a campfire in the snow. Every. Five. Minutes. This is made even worse in a way due to both the fact that all the episodes where he doesn’t feature are fantastically good, generally featuring Clare teaming up with various other Claymores who fill the same role but in much more interesting and dynamic ways, and also due to the fact that an early arc showing Clare’s past features most of the exposition a second time, much better done and could easily have replaced the initial episodes entirely and eliminated Raki's character altogether!

Visually Claymore holds up really well on its Blu-ray transfer and looks really good for most of the series. As stated above some of the initial action sequences are a little ropey but the series soon finds its feet, although later episodes do have a tendency for characters to go a little off-model and leave their eyes behind when they move their heads. The character designs, though seemingly simplistic, are good as well, with the uniformity of the Claymore’s actually working in the series favour in many ways. If anything though the visuals could have done with someone in charge making a decision as to how adult of a show this was going to be - wounds are sometimes vast geysers of blood,  yet at others they're utterly bloodless, and whilst female monsters have lovingly drawn nude breasts with nipples, the Claymore’s themselves are always covered in steam or by convenient hair. Funimation Entertainment’s dub isn’t the best it must be said, although it is watchable, and the Japanese is very solid throughout too. The music is of a generally decent standard too although it does somewhat bizarrely play its action music in some very odd places on occasion.

All in all though, Claymore does manage to deliver a really strong action show despite my undying hatred for he-who-shall-not-be-named-again. If you’re in the mood for an action series that really tries and often succeeds in providing dynamic, fluid, powerful fight sequences backed by a solid and interesting world-concept, then Claymore is for you. Just beware though that you may find the actual cost of this series is somewhat higher than the price of this Blu-ray set – there’s no proper ending after all and those 27 volumes of manga (of which the series covers only the first 11) aren’t going to read themselves...

Physical extras consist of postcards and an artbook (not available for this review).

7
Cuts a swaths through most modern action shows.