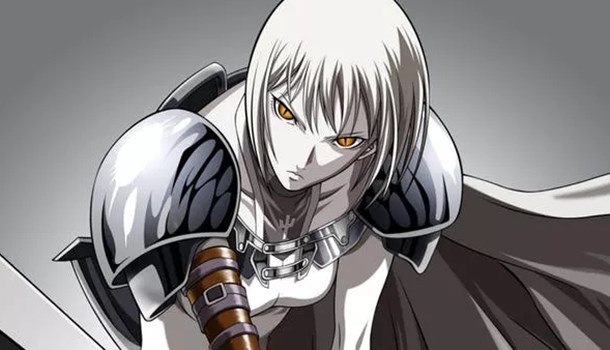 It’s been a funny couple of months with regard to anime shows for me.  I’m not sure if that’s because of a transient mood or just down to bad luck, but I’ve been quite underwhelmed by the last few series I’ve watched.  I decided to deal with this running streak of bad luck and tackle a fan-favourite in the form of Claymore.  At worst, my TV remote would meet the business end of a hammer and at best I’d come out the other end with an optimistic smile.  At this stage, I’m willing to take the risk.

The world of Claymore is primarily held in a state of fear owing to some nasty disposed creatures called "Yoma".  Their ability to mimic human form and blend into the population makes them hard to pick out from the crowd and due to their insatiable appetite for human innards, the "meat" population is understandably on edge.  Enter the Claymore; a half-human, half-yoma breed of female warriors/mercenaries, bred for the purpose of hunting down and destroying the Yoma.  It all sounds a little ‘monster of the week' and to start with it is;  the Yoma in the opening episodes are rather uninspiring and the fact that the Claymore seem more than capable of ending their greedy little existences in a single flash of their swords only adds to the groan factor.  Fortunately, this is short lived; as the plot kicks into the gear with some nice little shockers, more formidable foes start to enter the fray in the form of "Awakened" Yoma.

As far as our protagonists go, the story starts by following one Claymore in particular, called Clare.  She is sent by the organisation that has hired out her services to a town in order to rid them of a troublesome Yoma that's taken to 'eating out' late at night.  From here, she reluctantly picks up a stray child (Raki) and the two begin to travel together from town to town, while Clare undertakes various missions for the organisation.  As a character, she is as stoical as they come and while any other series might have been content to leave this persona alone, the series does a clever job of using the first 10 episodes to get you on board and care about this mystical little demon slayer.  It's not long before more Claymore's are introduced and a sinister undertone starts to penetrate the air.  Despite the organisations philanthropic appearances, one look at their handlers and it's clear that you wouldn't trust them with your grandmother.  I don't want to give any more of the story away but I will say this;  there's an element of 'Gunslinger Girl' to these women.  While they wield obscene amounts of physical power, these episodes never let you forget that they are victims along with everyone else.

On the technical front, the character designs for the female Claymore are gorgeous.  These women have a style about them that is both beautiful and dangerous and it's a breath of fresh air for me.  The music ranges across the board in places but it never drops to a level that detracts from the feel.  Moody, disjointed strings drift through the eerie, horror sections, while pleasing rock riffs accompany the action as it heats up.

The dub is passable.  I've heard a lot worse, but often the female voice actors for the Claymores sound too American-teen-highschool and this *really* ruins the work that the animation/story does in building up the mystique of the Claymores.

I went from feeling rather cynical about this to nodding my head in anticipation for the next episodes.  If it keeps on doing what it's doing then this series will shape up to be a corker.  I can't deny - Claymore has hit t

8
An interesting story, compelling leads and character designs to die for. It starts off a little shaky but quickly finds its' pace and finishes strong.
LATEST REVIEWS