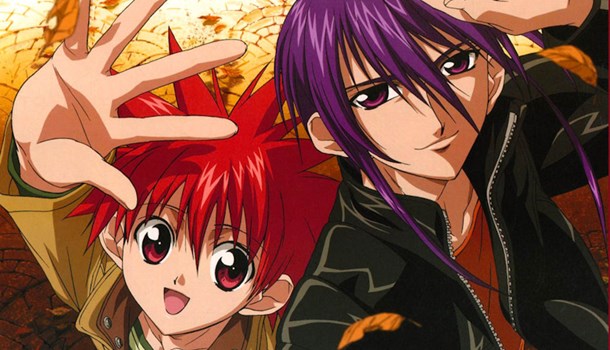 Daisuke is a young man with a problem. Most 14 year olds have enough to contend with - the onset of puberty, noticing girls for the first time... Unfortunately for Daisuke he also has to contend with his inheritence of a unique family trait, the ability to change into the super-theif Phantom Dark when confronted with the object of his desires, Risa. Now, Daisuke must win the love of Risa to return to normal, but she only has eyes for his alter ego!

DN Angel is a typical magical character comedy series aimed pretty squarely at the younger end of the market. It contains all the elements kids should like - as a hero, Daisuke is a likeable dork, and Dark is designed to look cool, though these 4 episodes don't give us much of an insight into his personality. However, it may be a little too slow in places. There's a lot of exposition, and the characters are quite muted - there's none of Beyblade's energy, nor Pokemon's charm, so it won't be long before the kids are getting fidgety.

There are moments of action, but the series has a little trouble getting itself into gear - it seems torn between angst-ridden drama and cute romantic comedy, but it doesn't really achieve either in this first offering. It just doesn't engage, though Daisuke and arch rival Hiwatari do enjoy a certain chemistry. Sadly there's not enough of it to take the series to a higher level and ultimately the series feels a bit flat and patchy.

It's a shame because the visuals switch from cute to moody in a heartbeat, and the idea of duelling angels should really grab you, but sadly it fails to use its ingredients to make anything appetising.