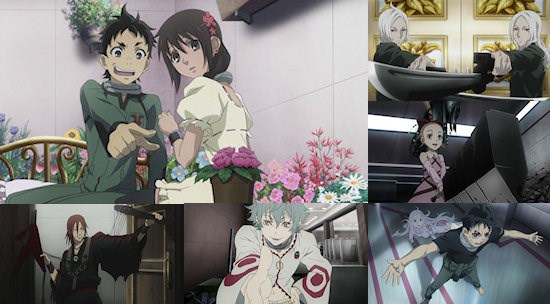 The first few episodes of Deadman Wonderland were nothing if not visceral, vicious and gratuitous in their delivery - right from the off we were treated to a quite literal blood and guts story as Ganta Igarashi sees his classmates slaughtered before his eyes by the mysterious "Red Man", only to find himself framed for this crime and shipped off to a prison that makes a visit to Strangeways seem more like afternoon tea with your gran.

If you thought that all of this bloody violence was simply to grab your attention before giving the topics at hand a more thoughtful treatment, think again as episode five dumps us straight into Ganta's first "Carnival Corpse" match - a fight to the death between two of the prison's so-called "deadmen" with the ability to control and use their blood as a weapon via the strange "Branches of Sin" power that they hold.  Needless to say, Ganta isn't exactly suited to deadly conflict, although somehow he manages to muddle through with what he sees as a perfect solution, emerging victorious without killing his opponent. Not that this makes much difference in Deadman Wonderland's twisted world, as all it guarantees for his rival is a "penalty game" with grotesque consequences, culminating in a scene that marks the first time I've ever been relieved to see censorship in an anime series - yes, it really is that nauseating.

From here, we meet more of the dangerous individuals of G-Block and the complicated circumstances of their decidedly messed up lives and pasts, before Ganta finds himself in the midst of a rebel group dedicated to escaping from Deadman Wonderland in the hope of showing what kind of nefarious activities are going on within it.  Of equal importance is further exploration into the role of Shiro in proceedings, with some hints at a shocking truth about her involvement in what we're seen so far as well as a simple explanation as to why she can be found wandering around a high security prison unchecked.

The biggest immediate obstacle facing Deadman Wonderland is that it's an adaptation of an on-going manga, and with only twelve episodes to work with even the option of creating an ending of its own is effectively out of the question.  Instead, the anime's finale is a bit of a damp squib - not quite daring enough to create a "proper" cliff-hanger, but nonetheless leaving numerous things hanging like so much washing caught in a downpour.  What seems like a perfect opportunity to rouse the masses into shouting "we need a second season, and fast!" is instead frittered away in half-baked fashion.

Look a little closer however and Deadman Wonderland has bigger problems to contend with, namely the fact that its story-telling is frequently laughably bad.  Shiro's appearances to save the day are cool once or twice but soon become tiresomely predictable, character's back stories are filled in via overblown flashbacks, and there's a sense of the ridiculous apparent in almost every episode - sometimes purposely to be fair, but often some of the show's most hilarious moments (robots that fire acid and one character throwing his severed arm at another) are normally the stuff of parody but played with a straight bat here.

This revelling in over-the-top violence and gore evokes memories of years past, when a lot of anime made it to the west not on account of its story-telling qualities but based solely on the fact that its blood and guts style would sell heavily amongst the teenage male demographic.  In a way, such reminiscences do add a certain charm to Deadman Wonderland as it sets about deliberately aping such offerings without too much thought, and if you're disappointed with the lack of brutally violent shows in recent years then this show more than makes up for it as it gleefully paints your monitor red.

Make no mistake though, that reliance upon violence and the show's admittedly snappy setting are pretty much the only highlights in an otherwise lacklustre offering that wastes numerous opportunities to offer something a little deeper or more emotionally resonant.  Even the show's entertainment value struggles to hold its own much of the time, which really shouldn't be the case given the promise its core concepts offer - somehow, between Ganta's constant plaintive cries about his hard done-by life and the frequent attempts by certain plot elements to "jump the shark", Deadman Wonderland simply doesn't work in this animated form.

You can currently watch Deadman Wonderland in streaming form right here at UK Anime Network, or via Anime on Demand.

5
A great watch for fans of pure blood and guts anime; for anyone else, this is an occasionally laughably bad series that never really moves beyond its childish fascination with gore.
LATEST REVIEWS