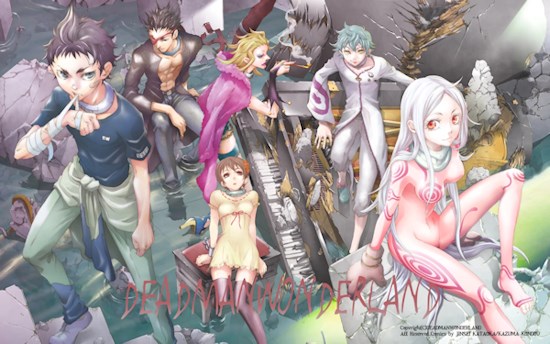 "Contains very strong language and strong bloody violence" - so says the BBFC website  about today’s subject so don’t say we didn’t warn you! Following on from its fairly successful  (if the number of Shiro Cosplayers is to be trusted anyway) streaming run on Crunchyroll in 2011, Manga Entertainment are now bringing Deadman Wonderland to the UK for a physical release on both DVD and Blu-ray (gloriously well ahead of even the announcement of a US Blu-Ray release). So, without further delay let’s descend into the prison of the future.

In the aftermath of a disaster that devastated Tokyo, a private prison has been established within the old city boundaries. Called Deadman Wonderland, it’s a prison like no other as the inmates spend their time working at this prison which also doubles as an amusement park, serving thousands of visitors whilst wearing mascot outfits, running rides and participating in games. Their rewards are points which can be exchanged for anything from food to a reduction in their sentences.

Ganta Igurashi is preparing for a class trip to the titular prison-cum-theme park when his class is attacked by a strange figure clad in red who proceeds to tear both Ganta’s life and his class to pieces before his eyes. In a shocking turn of events, Ganta is framed for the killings, sentenced to death and is sent to Deadman Wonderland. After entering the prison gates, a shell-shocked Ganta is introduced to the brutal reality of the prison – the inmates work not just for points but for an antidote to the poison which will kill them if they go more than three days without taking it. As horrific as this is, it’s only the beginning of Ganta’s problems as he reveals a previously unknown power to use his own blood as a weapon and must descend into the bowels of the prison to take part in a secret fight club known as Carnival Corpse.

As set-ups go there’s very little left to be desired here with buckets of action, mystery and some really fun characters - prison warden Makina quickly becomes a firm favourite as does the unassuming Minatsuki. Ganta’s strange companio, the childish Shiro, also provides a lot of fun as she casually hits people and generally gets in the way in her never-ending quest for food. The concept of the prison itself is fun too (even if we only really see it in action for one episode) and there’s an idea for a spin-off in there somewhere involving a series just following the average inmates around running the theme park.  There are also buckets of blood flying around too, even if the amount is somewhat unrealistic - Ganta should be dead from the blood loss following his first battle alone.

It also has to be said that visually the show looks amazing! It certainly isn’t going to keep any of the top-tier studios from sleeping at night but the fluidity of the animation and the level of detail, particularly in the action scenes, is really good. There is a slight issue in that the show does still appear to be censored by the black bar used in a variety of Japanese TV show - the BBFC passed Deadman Wonderland uncut so it would appear that the series never got a 100% uncensored version even in Japan, so this (as well as some censored language early on in the original Japanese language track) is intentional albeit distracting.

Unfortunately not everything is good in our little dystopia. Chief amongst the issues is our leading man Ganta, who proves an incredibly unlikeable little kid. Whilst his actions and character may be somewhat reasonable given his situation, it certainly doesn’t make him a fun character to watch as he whines his way through every episode. He’s really the kind of character who’ll set your teeth on edge and leave you absolutely baffled as you watch the other characters interact with him as if he’s this amazing person they want on their side. He’s also not very bright given that we see him befriend fellow inmate Yu without seeming to remember that he was punished not five minutes before for stealing from Ganta!

Apart from this, the other issue is that the series is far too short. Leaving aside the fact that it's based on a then-unfinished manga, everything just feels incredibly rushed, which takes some more of the sheen from a series that has plenty of promise but never quite lives up to its expectations when it comes to its delivery. Carnival Corpse only happens twice in the series, which robs its punishments of a lot of their threat and impact; whole characters and plot threads appear and disappear without warning with no real attempt to tie them into anything - Makina the prison warden suffers worst from this as she goes from being presented as a main character to disappearing almost entirely with only a few scenes every other episode, showing that she’s engaged in what should clearly be one of the major plot threads. That’s not even going into the ending, which more or less just stops pretty nonsensically. Having read some background prior to writing this review its clear that the series' producers have changed a fair amount of the story surrounding that area of the series anyway, so why they couldn’t either follow the manga to a good stopping point or come up with a decent ending is beyond me.

Still, if you enjoy a good action scene or two you’ll probably find something to like in Deadman Wonderland. If nothing else it will serve as a companion piece to the manga which has been rescued by Viz Media following the demise of Tokyopop (rescue Ikki Tousen and the Full Metal Panic novels next Viz!) It never lives up to its potential, but you’ll likely find something fun to keep you interested.

English 5.1 and Japanese stereo  audio with English subtitles.  Extras consist of trailers, audio and video commentary tracks from the US cast and the show's bonus OVA episode.

6
A fantastic concept, but the execution is a let-down.