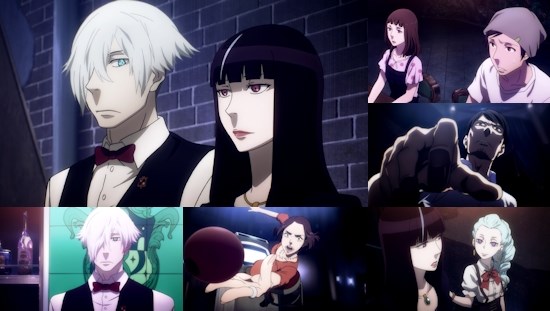 The Young Animator Training Project (or Anime Mirai Project as it's become known in some quarters) has, over the years, become more than simply a training project for upcoming animators in Japan and turned into a fascinating home for original content that might otherwise never see the light of day. In those terms, 2013's output from this scheme proved to be particularly prodigious - Studio Trigger's Little Witch Academia proved popular enough to provide a Kickstarter-funded sequel (which we should be seeing this year), while another entry in the form of Madhouse's Death Billiards has now flourished as a full series in its own right as Death Parade. Although this series looked all set to be locked away from the eyes of UK fans this winter, Viewster has popped up to save the day and bring the show to our attention via its growing streaming service.

In essence, Death Parade tackles a simple question - when a person dies, how should their life be judged? Rather than any kind of omnipotent overseer, Death Parade imagines a rather different way of choosing whether somebody should be sent to heaven or hell, or onwards to reincarnation or obliteration - by throwing them into a pub and making them play a bar game. No, really.

Okay, so it's a little bit more nuanced than that - in a situation where two people die at the same time, only one can be sent onwards to whatever eternal happiness the afterlife has to offer, while the other can only move on to their eternal punishment. To decide upon the fate of these two individuals, they're pitted against one another in a game - which just so happens to occur in an approximation of a lavish bar - designed to bring the true nature of their characters to the fore. Watching over these events are so-called arbiters, bar staff in this strange purgatory tasked with interpreting both what unfolds before them and their access to the memories of the deceased parties before them to help them make their ultimate judgement.

On the surface - and much like Death Billiards, the short which brought this series into being - Death Parade serves as a perfect vehicle for one-off, episodic morality plays that introduce us to two characters without any knowledge on our part as to their backgrounds and history, then allow us as the viewer to cast judgement upon them before throwing in details of their past lives to see how that colours those judgements in light of the twist in the tale that such revelations invariably bring to the situation.

In these basic terms, Death Parade is simple but devastatingly effective - episode one proves to be a cleverly nuanced tale of a young couple that will leave you pondering their actions and behaviour long after the credits have rolled; episode three is a smart little feel-good tale to prove that not every story has to end in tears and violence; episode four is a devastatingly effective emotional story featuring two very different individuals that is surprising in the strength of that emotional payload when it's delivered via an upsetting tale of two lives wasted under very different circumstances.

If this was the only string to the show's bow then it would have more than enough to be getting on with, but as it stands Death Parade also seems keen to explore the background to its locale - to some extent, we're introduced to its scenario via a newcomer to the Quindecim bar who gets to view the events of the first episode from behind the scenes while learning the "tricks of the trade" that the staff employ to come to their judgements. This in turn opens up an important element of the wider narrative of the show, pointing out that the decisions made by its arbiters aren't infallible, while also promising some more delving into the "employees" involved in this entire setup alongside more one-off stories.

While the way it tells its episodic stories is assured, Death Parade feels a little more cautious in its exploration of its wider setting - this may be out of a desire to more slowly unravel its world and the characters within it (a number of which we're still yet to even meet, judging by the fantastic opening credits, which are worth watching the series for in their own right), but it's an aspect of the show which could make or break our evaluation of it as a whole. On a personal level, I'll admit that I was a little wary of the idea of showing us the wiring under the board given how enjoyable its stories are on the surface, so the second episode has at least reassured me that there are interesting angles to be explored from this side of proceedings.

Beyond its narrative, Death Parade is also an enjoyable visual feast - sporting a suitably restrained colour palette in keeping with its subject matter and location, but still capable of providing some sumptuous locations (the bar setting in itself is worth dying for to visit) and stand-out moments of animation when the situation requires it. Character designs also fit the show's aesthetic like a glove, the use of flashbacks into the past of characters is well-realised, and the overall look and feel of the show is pitch-perfect throughout and a joy to behold.

Although we still have some question marks as to whether Death Parade can prove to be successful when taken as a whole at the end of its twelve episode run - questions that we'll certainly be revisiting on the site once its broadcast run has finished - what we've seen so far has easily marked it out as a must-watch series for the winter season. As a series that stands apart from the typical fare we tend to see every new season it's notable in itself, but that doesn't mean that it's simply a token effort that dares to be different - here is a show that exhibits some strong, confident story-telling that makes full use of an interesting premise, and delivers it in an irresistible fashion. If it continues in that vein, then this could be a 2015 series to die for, and you won't even need to play a game darts first to fully enjoy it.

You can currently watch Death Parade in streaming form on Viewster.

9
Brilliantly realised morality plays set against a fascinating world marks this out as a fresh original series that shouldn't be missed.
LATEST REVIEWS