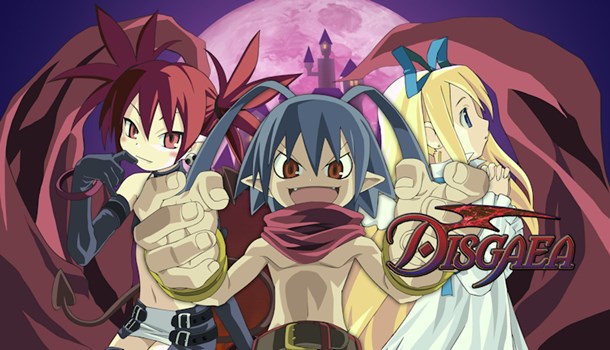 I can officially say that I have met my antithesis. Laharl is a chap who is completely self obsessed, egocentric, completely corrupt, evil to the core and becomes physically hurt in the presence of voluptuous bodies... oh, and he just happens to be a demon prince. Yeah, I think that covers everything.

Ok, so perhaps we share just a couple of traits... I seriously don't get what his problem is with the female form though. Weird...

Disgaea caused me to have my first anime related laugh out loud moment since that drunken night with three bottles of cider and FLCL. I think it began about 30 seconds after the title sequence as the blonde and very dim trainee angel, Flonne, decided to use a DIY store’s worth of tools to break into a casket. To begin with, I am not sure what exactly it was that made this laughter happen, but i think it had something to do with the look on her face as her magic, the axes and the large anime-style mallet all failed and she had to resort to whipping out a heat seeking missile launcher to perform the task. It was truly beautiful and it was just the start of a highly amusing evening.

The story so far is quite simple. Dense little trainee angel, Flonne, comes from Celestia to the Netherworld in order to assassinate the Overlord, the ruler, of the Netherworld. So, after doing not a lot for two years, this angel finds a hidden casket, and believing that it contains the Overlord, breaks it open. Out from this casket came a grumpy little sod whose one endearing quality is that he is completely obsessed by his greatness. After basking in this greatness and completely showing up the little blonde angel, he makes his way back to the Overlord castle to reclaim his throne. On the way he meets other characters including the Disgaea equivalent to Team Rocket, Captain Gordon the Defender of Earth (I so read Flash Gordon) and his overly buxom companion whose one and only talent is the use of her appendages to garner information; and Etna who is a delightfully devious and oddly cute demon with an army of argumentative British Leyland workers transformed into peg legged penguins.

It’s hard to say exactly what it is, but the characters, the dialogue (as long as you avoid the English dub) and the storyline all come together to make a series which just seems to work. Add to that the beautifully sculptured characters and the elegantly twisted storyline which have both been directly lifted and slightly adapted on-screen from the PlayStation 2 game Disgaea: Hour of Darkness, it is safe to say that the series shows much future promise.

I recommend serving the series with a bag of Tesco Finest chocolate chip cookies and a healthy portion of Gin and Tonic.

Extras include textless opening and closing credits and special talks with the Japanese cast.

9
If Disgaea doesn’t have you in stitches, then a Prinny body is in your future...