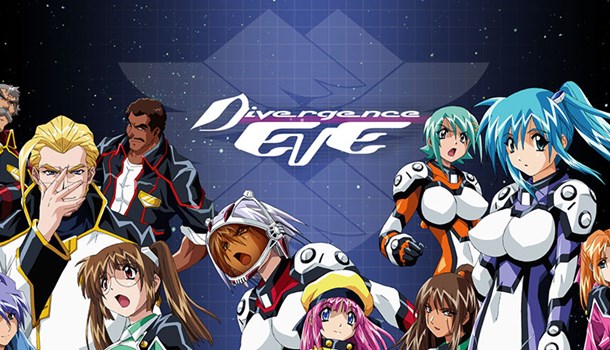 A single word dominated my thoughts as I watched the ending credits of the final episode: surprise.

The story of my experience with this anime are thus: The series was only a few months old when Ayacon was showing the first two episodes in a screening. I was sitting with Dan (see forum) and we came to the agreement about 7 minutes in that it was a fanservice based science fiction show with little promise. The fanservice comment came from a simple statment I made about the show which is this:

“There are no breasts in this show smaller than a D cup, and they are all made out of gelatine! Mmmm, jiggly….”

I will perhaps expand on this point a little later as for most of the people I know it was the reason they avoided it.

The series is about the ongoing battle between a native species called the Ghoul and the humans who inhabit the station surrounding the planet they materialise on. The Watchers Nest also acts as the key to an enormous wormhole propulsion system, linking Earth and the Watchers Nest. This technology transcends the boundaries between universes. Confused yet? There's more...

On board the Watchers Nest is an enormous civilian and military population. To the majority of this population the existence of the Ghoul and the station's defensive role is a secret, and thus the first indication of a conspiracy theory appears.

The structure of the series proves to be a little confusing at first. The first episode contains the penultimate battle where Misaki, the genetically evolved unlikely heroine of the series fights the Ghoul with the other members of the Seraphim force in a last ditch attempt to save the Watchers Nest from destruction. But of course, in the first episode you don't know that. The following episode finds Misaki and her other team-mates as cadets on their way through the wormhole to the Watchers Nest and beginning basic training. This "flashback" sequence has been seen recently in series such as Gungrave and, at its best, in Berserk.

The animation is very crisp and is a composite of CGI and cell animation, with the action scenes being entirely CGI and as much as I wish it was, the credits have no mention of Gonzo, who may have made a slightly better job of it. Somehow this brings me back to breasts (I can't follow the logic either - Ross). I suppose the sheer size, the movement and the actual attention to detail put into such appendages was what formed my initial fanservice opinion. And this opinion is now confirmed as well-founded, as the abundance of breasts, jiggling, the occasional panty shot and the three separate highly detailed occurrences of Misaki nudity belies the seriousness of the narrative.

I do find the animations of the breasts to be over-exaggerated un-necessarily as this proves to be immensely distracting. I would have preferred a more realistic movement over the gelatine type movement the studio chose. (Am I just too obsessive on the subject of breasts?)

Now, with this kind of contradictory writing and artwork, you would hope the soundtrack is better. Quite honestly, as enjoyable as the series is, the major disappointment is the sound quality. I found a few errors with the stereo and 5.1 tracks on the English dub which all come down to poor encoding during the production process and forced me to enhance the bass in order to get a reasonable volume. This error occurred only in volumes 2 and 3. The English dub is quite laughable in places, with perhaps some of the most over exaggerated British accents ever heard - there are much better dubs than this out there.

So, with all these quite unique features I bet you're dying to know what I think. Much to the dismay of the people on IRC, I loved it. I found the show just as addictive to watch as any other and in many ways I had fond memories of Vandread and Full Metal Panic.
7
A real surprise. There is a lot more to this show than large jiggling breasts!