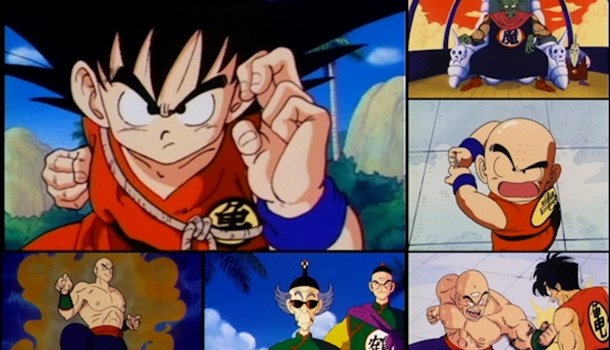 When all else fails, the Dragon Ball franchise always has one tried and trusted narrative device in its arsenal, guaranteed to entertain while also letting the show in question introduce new characters or build upon existing ones in an easy and convenient way - the World Martial Arts Tournament.

It just so happens that this fourth collection of episodes from the original Dragon Ball series begins in just such a fashion, with the gang heading off to compete in the latest World Martials Arts Tournament, although as per usual Goku leaves it late to make his grand entrance. This particular tournament, however, provides Master Roshi with a particularly unwelcome reunion, as our favourite Turtle Hermit comes face to face with the "Hermit Crane" Master Shen, a man with a very different outlook on fighting.

Thus, the battle between the ideals of the Turtle and the Crane collide, both directly and via the pupils of these two old masters, in clashes that also gain some added frisson from events which occurred previously within the series to give a deadly edge to some of the battles on show in the struggle to claim the place as martial arts master of the world. With new characters entering the Dragon Ball stage fully and getting fleshed out rather wonderfully against an entertaining backdrop of action, comedy and drama, it's Exhibit A in our assertions that this particular format can provide much of what the series is capable of at its best.

Even after this successful story arc (and arguably because of its success), the remainder of this collection kicks things up another notch as celebrations at the end of the tournament are cut short by a mysterious intruder and a shocking death. It doesn't take long to track down the individual ultimately responsible for this act of violence - King Piccolo, an incredibly powerful and dangerous demon who has returned in the hope of completing the task he failed in the last time around. Unfortunately for the people of Earth, that task was subjugating the planet, and this time around he's determined to eradicate those who might exploit his only weakness while also seeking out the Dragon Balls to return him to the physical peak of his youth. Needless to say, this is the toughest challenge any of the cast of Dragon Ball have faced yet, and this new threat brings with it difficult decisions for some of those involved.

Out of everything that the series has attempted so far, this particular saga is the clearest precursor to Dragon Ball Z yet in its setup and the high stakes conflict that it introduces, which probably goes to explain a lot about why I enjoyed this particular arc so much given that it encompasses much of what I enjoyed about that classic sequel. The show's comedy is still present and correct, but it's better placed and somewhat more restrained on account of the other subject matter which comes to the fore, which (in my book) really gives the actual story at hand room to breathe.

Beyond that, everything else is as you'd expect of Dragon Ball - its animation remains surprisingly timeless, its English dub remains the preferable viewing option, and its video transfer is mostly clean and enjoyable even when a large number of episodes are dropped onto a single disc.

For us then, this is Dragon Ball at its best, and seemingly setting itself up to go out with a bang via its fifth and final collected volume before the year is out if these two story arcs are anything to go by. If, like myself, you prefer Dragon Ball Z to its direct predecessor, then this is the point in the series where the gap between the two shows in terms of its content is clearly bridged, making it well worth watching no matter your particular preferences when it comes to this massive franchise.

7
This could be argued as the point where Dragon Ball perfects its formula, to provide us with its best material yet.
LATEST REVIEWS