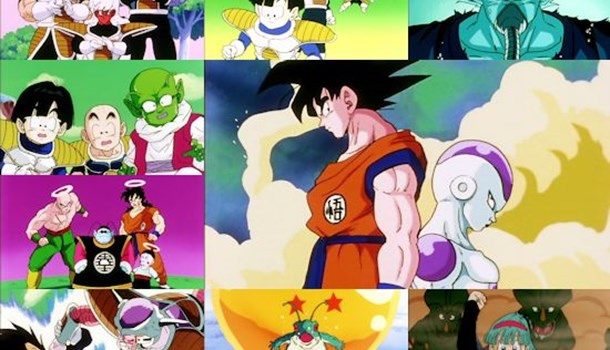 Much like a powerful anime character, Dragon Ball Z just keeps on coming like a freight train - as soon as we polish off our thoughts on one series, up pops another batch of discs to give us more sleepless nights filled with intense shounen action.

By the end of Dragon Ball Z's second series, we were well and truly in the midst of the show's Frieza saga - a saga which comes to and end via another hefty chunk of over thirty instalments to take us over the one hundred episode mark.  With the Ginyu force defeated (although they still have a part to play in this series in a couple of ways) and Goku back in his own body again, things move forward pretty swiftly with the search for the "password" to Namek's Dragon Balls resolved in short order and adding another powerful fighter to the roster.

Although we establish a little more about the back-story of both Frieza himself and Vegeta over the course of these six DVDs, our real focus soon becomes clear, and as you'd expect it's all about a battle to the death in an attempt to defeat Frieza and his many faces while he unlocks more and more of his latent powers before (hopefully) returning home.

What an epic battle it is too, with some shocks in store (for those who haven't watched Dragon Ball Z before, at least) and some surprisingly brutal violence in places to the point where it's almost a little unsettling in the gruesome glee it takes in making some of our heroes suffer.  Once things boil down to what is largely an even simpler template - Goku versus Frieza - we start to see a few cracks appear in the show's template for the first time, with the same scenes repeated time and again and some establishing shots lingered on for far too long as the series looks to pad out its current story arc to meet its particular requirements.

Luckily, such tricks of the trade are never over-used to the point of being truly distracting at this point - the series still has enough going on in the way of other side-stories from the main action to deliver changes of pace when required, giving us slices of comedy or secondary action to keep things fresh and avoid us getting bored with the main attraction.  Not that the bulk of the action never really gives us an opportunity to get tired of it, reaching as it does a planetary scale as it slowly but surely makes its way to its climax, and then throwing in a few more final twists and turns for good measure before cleaning up after itself somewhat at the conclusion to the story arc as a whole.

By this point in the game, Dragon Ball Z probably shouldn't work as a series - broadly speaking you know what's coming at this juncture, and the fact that it comes along so slowly (no matter the difference between Earth and Namekian minutes, references to things taking "a couple more minutes" before they drag out for four or five episodes illustrates just how slowly things are moving) should dramatically reduce the ability of the show to keep the viewer hooked.  Yet somehow, it genuinely doesn't - there's a constant feeling of tension around the story, and its twists and turns still manage to catch you unawares at times in a most satisfying way.  Above all, Dragon Ball Z is still fun to watch throughout this volume - its overblown action and super-powerful fighters know no bounds, and you can't help but admire it as it plays fast and loose with physics in the name of pure, unadulterated entertainment.

In keeping with previous instalments, the show's remastered DVD release still looks great for the most part despite its animation showing its age, and the Japanese and English language tracks offer very different but equally enjoyable takes on its dialogue.  The biggest issue that the series suffers with here is its mono effects audio track - once you start tearing planets apart the limitations of the original recording are put on trial and found wholly guilty, sounding more like interference than the sound of waves crashing and mountains crumbling.  There's nothing that can be done about this of course, but it can be a little distracting in places when the environmental destruction is really ramped up.

We're not yet at the half-way point at the series, but if I was worried about it holding up for its first one hundred episodes in terms of entertainment value (and for the record, I really was as a newcomer to the franchise) then such concerns appear to have been unfounded.  Certainly, it's formula and how it achieves its results is plain to see, and the manner in which it draws out its story to fit its requirements is starting to show in more obvious ways, but that isn't enough to diminish the pure and simple fact that Dragon Ball Z is still a whole lot of fun to watch, and then some.

7
Some of the tricks the series uses are becoming more obvious, but not to the detriment of the sense of fun and entertainment that can still be had from watching this classic of its genre unfold.
LATEST REVIEWS