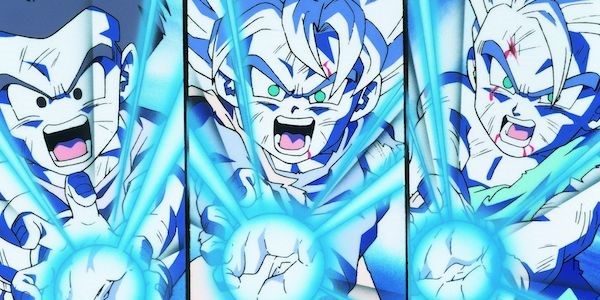 Another month, another Dragon Ball Z Movie Collection. Manga Entertainment are banging these sets out at a fair old pace now, and this month sees the debut (and redux and resurrection) of the movies’ most iconic villain, Broly - The Legendary Super Saiyan. Dragon Ball Z Movie Collection Five: The Broly Trilogy covers the entirety of the Broly lore in the movies, a wise decision even though it does mean the movies are a little out of order as a result (Broly - The Legendary Super Saiyan takes place before Bojack Unbound, from the last collection).

The first movie in this collection introduces the titular Broly – The Legendary Super Saiyan, though not before the Z-Fighters are sent on something of a wild goose chase by a mysterious Saiyan. There’s a mysterious force forging a path of destruction through the South Galaxy, and King Kai fears the North Galaxy will be next. Thus he contacts Goku, who is all too keen to abandon the private school interview Chi-Chi has dragged him to. Meanwhile a number of the Z-Fighters are enjoying a picnic, their peace is disturbed by the arrival of an unknown spaceship, aboard which is a previously unknown Saiyan, Paragus.

Paragus has an interesting proposition for Vegeta, to whom he offers his rightful place on the throne of New Planet Vegeta. He also warns Vegeta of the “Legendary Super Saiyan” who is running amok across the galaxy, claiming only the Saiyan prince can stop him. This being Dragon Ball Z is isn’t long before the “Legendary Super Saiyan” shows up for battle, though his identity and origin proves to be something of an unwelcome surprise for Vegeta. The usual battles ensue, and play out exactly as you might expect.

Though the setup is one of the more interesting from the film series so far, the battle sequences feel a little tired and cliché. Perhaps I’m just beginning to suffer from a little Dragon Ball Z movie fatigue. Though there are some stand out moments to be found here. Vegeta in particular puts in a somewhat unusual performance for him, showing a side of his character seen only when faced with utterly insurmountable odds.

The second - and for the first time not the final - component of this set is appropriately titled: Broly – Second Coming. After his (spoiler for the first film) defeat at the hands of Goku it seems Broly managed to escape the doomed New Planet Vegeta, and found his way to earth. Once there he lost consciousness and was buried at the bottom of a crater, under tonnes ice, for a number of years. Yes, it’s one of those setups…

Anyway, the earth could be in real trouble this time as Goku is spending a little time being dead (because he sacrificed himself to defeat Cell). Broly – Second Coming begins with a bit of a light hearted adventure involving Goten, Trunks, and Videl. This feels very much like (quite deliberately I assume) some of Goku’s childhood adventures with Bulma and co. Though it’s not long before the trio stumble over something that would have been best left buried.

Much like Bojack Unbound before it the second of the Broly trilogy offers something of a breath of fresh air, by excluding Goku from most of the film. Though given those two films were originally back to back, it wouldn’t have been quite so refreshing had they been released in that same chronological order. This ultimately means that Gohan takes up the reigns again, though this time he doesn’t need an assist from ‘ghost dad’ Goku. This nicely punctuates how much the Z-Fighters have progressed since their last meeting with the “Legendary Super Saiyan”.

Finally there is Bio-Broly, which manages to carry over a few story threads from the previous film. This is also the second movie to feature the comedy stylings of a certain martial arts champion, Mr Satan. Though the real stars of this show are Android 18, Goten, and Trunks, who manage to stumble into a trap designed for Mr Satan. As you might expect given the cast list, this one’s pretty dumb but mostly fun.

While some of the individual elements perhaps don’t represent the best of Dragon Ball Z, when taken together this adds up to arguably the best of the Dragon Ball Z Movie Collections to date. It showcases everything Dragon Ball Z has to offer, from Goku’s determination and Gohan’s steadfastness to the rambunctious young Saiyan’s Goten and Trunks. With a total of three movies, instead of the usual two, it certainly makes the best value of any of the collections to date.

7
Legendary Saiyans and an extra movie make this arguably the best set to date.
LATEST REVIEWS