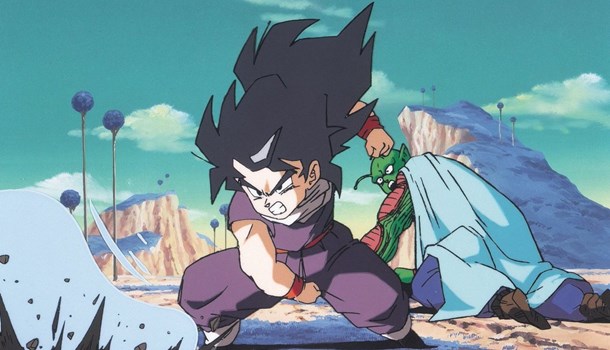 Following hot on the heels of Dragon Ball Z Movie Collection Two comes this third dose of Dragon Ball movie goodness from Manga Entertainment. While the four movies released to date have been predominantly set right at the beginning of the Dragon Ball Z franchise, the next two will be in somewhat more familiar territory for many. Being set after the defeat of Frieza, and therefore featuring the legendary Super Saiyan form for the first time (unless you count the faux-Super Saiyan moments in Lord Slug) in the movies. Though the Frieza links don’t end there, as both of these movies star his older brother Cooler as the main antagonist.

Cooler takes a more level-headed approach than his younger brother, despite being every bit the ruthless killer that his sibling is. It is this cooler (pardon the pun!) head which directly feeds into the plot, with the older brother watching over the carnage as Frieza decimates Planet Vegeta. He comments on Frieza’s naïveté and spots a small Saiyan space pod escaping the planet’s destruction, something he feels is Frieza’s responsibility to deal with. A decision which the whole family will later come to regret.

Sometime later, Cooler learns of his brother’s defeat at the hands of a Saiyan and travels to Earth, with the intent of putting the Saiyan monkey back in his place and reclaiming his family’s honour. Traveling with him are his armoured squadron, a slightly toned down - or cooler if you will - version of Frieza’s Ginyu Force. Goku and friends are on a camping trip as the aliens descend to Earth, they find themselves ambushed and unable to put up a proper fight after Goku takes a full blast from Cooler while protecting Gohan. The rest of the film deals with the aftermath of those events, as Krillin and Oolong look after Goku while Gohan sets out on a mission to retrieve some Sensu beans, with which to revive the ailing hero.

Piccolo also makes an appearance - to aid Gohan - before the inevitable face-off between Goku and Cooler, which strongly mirrors the earlier battle between Goku and Frieza. If you enjoyed the Goku and Frieza fight you will likely love this movie, as it is really just a streamlined version of that iconic slice of Dragon Ball Z.

The second movie in this set is Return of Cooler. At the point in time this film aired the series was well into the Android Saga, meaning everyone’s a little older, a little more powerful, and perhaps most importantly means Vegeta makes his Dragon Ball Movie debut. After his inevitable defeat at the hands of Goku in the previous film Cooler is back, and this time he’s terrorising the new Planet Namek. Without delving too much into the realm of spoilers, it soon transpires that he’s teamed up with the “Big Gete Star”, a planet sized mechanical monster born in the depths of space. And Cooler intends to suck the Planet Namek dry of all its resources to power the star. Sensing the danger to his home planet Dende requests that Goku, Gohan, Piccolo and friends travel to New Namek to aid his people.

However, this Cooler isn’t the same Cooler Goku defeated before. The “Big Gete Star” has upgraded him into “Meta-Cooler”. Thus, it will take a lot more than just Goku on his own to win the day this time...

All in all, these two movies easily make this the best Dragon Ball Z Movie Collection to date, with the first in particular providing fans of the series with some top tier Dragon Ball Z action in a short form movie. The second movie is a bit more a of mixed bag, while some of the action is spectacular the ending is a little messy and ultimately feels anticlimactic after a promising build-up. We did find one interesting - but rather minor - technical issue on our review discs, the opening music for the Japanese audio on the second movie seems to be the English language audio. The rest of the disc seems to be fault free, so it appears to be just an odd little quirk of the release.