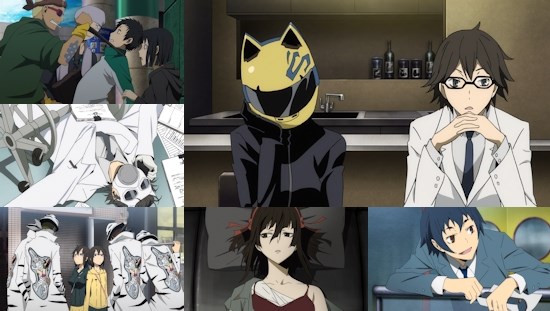 It doesn't feel like five years since Ryougo Narita's light novel series Durarara came to life in animated form, throwing us into its decidedly weird and wonderful take on Ikebukuro to provide a unique and frequently thrilling series that quick cemented its place in the hearts of many. Perhaps it doesn't feel like five years because since then we've been able to enjoy releases of the show on both DVD and Blu-ray, but these occurrences never entirely satiated our hunger for more. Thankfully, this hunger is about to be serviced thoroughly, as 2015's winter season sees the first of three split cour series which make up Durarara x2 coming our way.

Although the show's production has switched from Brain's Base to a brand-new studio, Shuka, the mainstay of the show's production staff have remained the same - Durarara x2 is once again helmed by Takahiro Omori as director, and there's a very clear consistency in the delineation between this series and the original, right down to the way that the opening titles introduce you quickly and effectively to its otherwise baffling array of characters. That said, unfortunately Crunchyroll has chosen not to subtitle the names of those characters for its streaming release, by way of a major oversight that rather misses the point of this otherwise energetic and smart way of bringing you up to speed with the cast.

That aside, the first episode of Durarara x2 is an exceedingly well-placed reintroduction to its world - rather than a stale recap of prior events or lots of boring voice-over exposition, this is a masterful example of "show don't tell", throwing us straight back into the decidedly insane world of its major characters as they go about their business in a way which instantly jogs your memory about each and every one. While this admittedly won't help newcomers to the show (you simply have to go back and watch the original series - trust us, it's well worth your time), it makes full use of the power and strength of character that the show has to remind prior fans exactly what it is they love about Durarara, and in that sense it's a lot like meeting an old friend you haven't seen in years and remembering why you used to hang out a lot after a few drinks.

Such is the confidence that Durarara has in its characters than even after four episodes we've only reached the point where its major plot points are beginning to take hold, that instalment ending with information broker Izaya wrapping things up to make a clear suggestion that we haven't even started to delve into its stories of serial killers, supernatural swords, psychotic siblings and yet more troubles lying in wait for Mikado and the Dollars. In fact, it seems that the supernatural phenomena who use Ikebukuro as their stomping ground are greater in number than ever, allowing the show to raise the bar in terms of the kind of unusual occurrences that it can revel in.

Many of these storylines are brought into being by the introduction of a number of new characters, all of which fit surprisingly well into the existing cast and stake their claim as memorable in their own various ways, in spite of that aforementioned opening credits naming issue on Crunchyroll. Topping the bill are Izaya's crazy twin sisters, who steal every scene they inhabit to follow through on their appearance in one of the first season's OVA episodes with aplomb. Add to that a new "friend" for Mikado, a very unusual pop idol and some more focus on Shizuo's brother, and you already have some compelling additions to the cast.

Not that this means that existing characters are neglected, mind you - Kadota and his band of friends continue to be ever-present, headless rider Celty of course features prominently (and is given a whole new side to her personality thanks to her blossoming romance from season one), and there are plenty of other familiar faces on show too. Assuming you are an existing fan of the series, the weaving, shifting sand of stories and relationships which make up the series are as strong as ever here, effortless dipping forward or shifting backwards in time and offering the same events through the lens of various different characters to build up an intricate tapestry before the viewer in a way which never ceases to immensely entertaining to watch play out. Indeed, even having seen both the first series and the opening gambits of this second season, it still genuinely boggles my mind how Durarara manages to play out a narrative that would seem like an utter mess in lesser hands yet somehow balances its mystery and coherence perfectly - it's effectively the anime story-telling version of a plate-spinner who never allows a single plate to drop to the floor.

Durarara has always erred on the side of functionality over jaw-dropping imagery, and this second season is no different in that regard - it keeps the same level of quality and fluidity as the first series, and is proficient at everything that it does to ensure that it can relate its tales with all of the comedy and drama packed within them efficiently. Beyond that omission we mentioned with its opening credits, the rest of Crunchyroll's subtitle treatment is very good, so there's nothing more to worry about on that front.

They say that absence makes the heart grow fonder, and that is certainly the case with Durarara - having not watched its first season in some time, I didn't realise just how much I wanted to spend more time with its location and characters until the opening credits rolled on the first episode of Durarara x2, and suddenly all of my love for the time spent with this series previously came flooding back almost instantly. If you are in similar company as a fan of the show, then watching this second series really is a no-brainer - it's more of the same with the promise of even tastier doses to follow, and in this case that level of continuity is excellent news indeed.

You can currently watch Durarara in streaming form on Crunchyroll.

8
It's been a while since Durarara last graced our screens, but it's lost none of its knack for telling sprawling, character-driven stories in an utterly compelling fashion.
LATEST REVIEWS