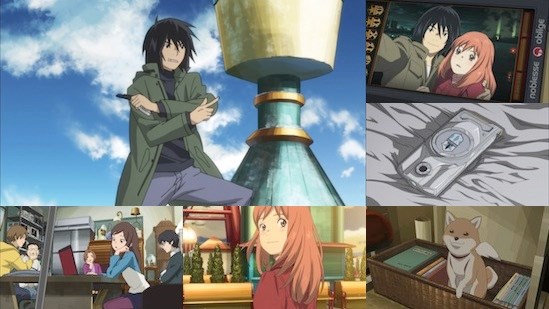 If you were given ten billion yen and a phone where the operator could seemingly grant your every request, how would you improve society? This is the question that has been posed to twelve carefully selected Seleção, in a game curated by the mysterious Mr Outside. However if all the money is used up or it is used for selfish purposes, that person will be targeted by the twelfth participant, who also acts as “the Supporter”. The game is afoot in 2009’s Eden of the East, which has returned to mystify fans all over again thanks to a Collectors’ Edition set courtesy of Anime Limited. Included in this set is the original 11-episode series, along with its two concluding films The King of Eden and Paradise Lost.

Three months after ten missiles strike Japan in a victimless attack known as “Careless Monday”, university senior Saki Morimi is visiting Washington D.C. as part of her graduation trip. After getting into trouble at the White House gates she’s saved by a mysterious naked Japanese boy with no memories. After taking the name Akira Takizawa from one of the fake passports in his apartment, he soon discovers he is Seleção number nine in Mr Outside’s game and begins retracing his steps to uncover both his past and Mr Outside himself. To do so Akira teams up with Saki, as well as her developer friends in Eden of the East – a phone app that can identify both objects and people using a user-populated information database.

As Akira uncovers more about Mr Outside’s game and its link to Careless Monday he also comes face to face with other Seleção, all of whom have their own ideas of how Japan should be saved.

Solving the mystery behind Mr Outside’s game is at the heart of Eden of the East, and it’s a mystery that keeps both the characters and viewer in the dark about for as long as it possibly can. Creator Kenji Kamiyama had previously shown his abilities to present a gripping drama with Ghost in the Shell: Stand Alone Complex, but the relatable qualities of Eden of the East make it so much more captivating. Keeping it all together is a wonderful cast, led by the unpredictable Akira and the headstrong Saki. Even the rest of the Eden of the East group, whose involvement is largely investigative, all have their moments to shine. No character feels wasted, and even in a scenario that’s as wildly implausible as this everyone still somehow manages to feel totally believable.

The political backdrop is supported by a unique sense of style and humour, mixing in oddly-specific film references (Kate & Leopold is one of the last films I’d ever expect to see referenced in anime) and a serial killer for removing (in the show’s own words) “johnnies”. And if that isn’t enough, then prepare yourself for the moment 20,000 naked NEETs (Not in Education, Employement or Training) descend on an empty shopping mall Dawn of the Dead style. As bizarre and irrelevant as all of these things may seem, they’re all woven into the bigger picture.

It’s worth noting that Eden of the East was originally slated for two 11-episode seasons, however for whatever reason those plans were scrapped and the second half was instead released as two films. What didn’t seem to change with this new format though was the flow of the narrative, leading to some uneven storytelling between the different “sections” of the series. Those initial 11 episodes feel almost feels like a prologue to the movies rather than a standalone entity, as a swift six-month time skip sets up a new status quo where all the answers are eventually revealed.

The King of Eden and Paradise Lost are two films best viewed together, as neither works particularly well as a standalone piece. This is to be somewhat expected given the nature of Eden of the East as a whole, but you can help feel a little frustrated at sitting through a 90-minute film and feel none the wiser at what is going on. Rest assured answers do finally come by the end of Paradise Lost though, with the series ending on a satisfying, if open ended, note. It would be far too convenient for everything to be wrapped up in a neat little package, but the optimistic conclusion we do get certainly does the series and its theme justice.

But even though Eden of the East’s main qualities lie in its cerebral factor, that is complimented by some gorgeous animation and character designs. It’s unfortunate that the show comes from a time where CGI implementation wasn’t very fluid in anime (with the vehicles often standing out like sore thumbs), but the scenery work implemented is breathtakingly good – with real-life locations recreated right down to the finest detail. Chika Umino’s character designs have an almost Studio Ghibli-like quality to them (Saki especially) that give the show a distinct visual identity. All of these praises are only accentuated by this high definition release, so when it comes to Eden of the East Blu-ray is the only way to go.

Interestingly this set doesn’t advertise the fact that it also includes the Air Communication compilation movie as an additional feature. This two-hour abridged version of the series was originally released to bring viewers up to speed just before the release of The King of Eden and Paradise Lost. While many will overlook it in favour of the series itself, Air Communication does also have its own unique trait - the footage might not be new, but it’s also supplemented with audio commentary from the cast that sheds further light on some of the more pivotal scenes. In a series as involved and perplexing as Eden of the East, having this extra little bit of clarity can make all the difference. So any buyers fearing this may be missing from the set can rest assured - this is most certainly a “perfect” Eden of the East release.

When Eden of the East was first released in 2009 it wowed audiences with its sharp political message, engaging characters and bizarre sense of humour. Eight years later and it hasn’t lost any of that edge, with its message that the youth are the future just as relevant as ever. It is a series more than worthy of being considered one of the “modern greats”, and if you haven’t discovered its wide appeal yet then don’t let this collection pass you by.

9
The definitive release of a near-perfect series. You can’t stop the children of the revolution.