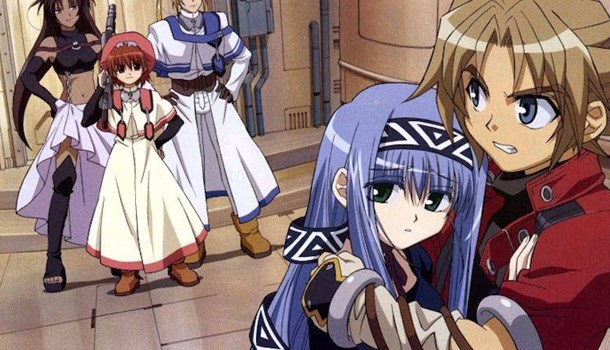 Being a space pirate isn't all it's cracked up to be - There are no eye patches for starters.  Or parrots.  There's not even a wooden leg in sight, and those red jump suits are very... well... un-piratey.  So, space piracy might not be an ideal career move, unless of course your name is Coud van Giret, in which case a major moment of serendipity sends you on an epic journey helping a very special girl reach her desired destination.

That's right, the second volume of Elemental Gelade on DVD continues Cou's quest to assist Ren, a girl whose meek outer appearance hides the fact that she is in face a powerful weapon, known as an Edel Raid, on her way to Edel Gardens, helped (or, just as often, hindered) by a trio from a group known as Arc Aile.  What follows is, as we noted in our review of volume one of the show, a rather predictable romp through various good guys, bad guys, friends, foes and mishaps - If you're looking for a groundbreaking plot or storytelling, you've certainly come to the wrong place.

Yet, despite all that, Elemental Gelade continues to ‘just work’ somehow.  The pace of each episode is really rather brisk, giving few opportunities for the viewer to become bored and keeping the action flowing nicely, while the more serious and/or action-centric moments are nicely offset by the more humorous turns, usually provided by the trigger-happy Cisqua.  With a bunch of likeable main characters and suitably evil villains (despite their often rather fleeting appearances thus far), no matter how hard you try you can't help but have a bit of a soft spot for the series and its main protagonists.

Really, that's all there is to say about the show thus far, and indeed the four episodes that find themselves in volume two of the series on DVD - If you don't mind the slightly ropey animation at times, then this really is anime as mindless entertainment at its best.

Slightly more on offer extras-wise than volume one gave us, with Japanese voice actor interviews making for an interesting distraction away from the other standard fare here - English and Japanese audio, English subtitles, text-free opening credits and trailers.

6
The Starbucks of anime – Nothing sensational, but it keeps you coming back for more.
LATEST REVIEWS