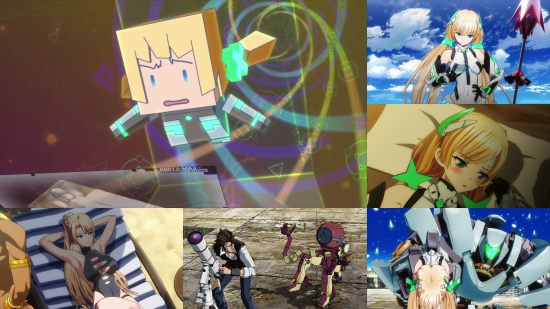 I had a dream once, probably after a few tall glasses of gin and a marathon of the Tron movies, where I “woke” to find myself inside a computer. I remember being on the run from something that threatened to decompile me, and I woke up feeling like I had been run through a defragmenter program a few times. Perhaps that was the hangover. Either way, it was unpleasant.

It has long been theorised that there may come a time in the evolution of humanity where we as a species, or more likely those who are rich enough, decide to leave the mortal world and live immortally as a computer simulation inside a huge computer bank. In Expelled from Paradise, a facet of our society have relocated into a wholly digital world on board the space station DEVA. Okay, so there was a good reason for this: complete climatological failure on our planet. This makes sense to me. It’s easier evacuating a planet when your passengers are digital only, rather than carrying bodies, food and life support systems. However, at first glance, what looks to be a paradise is less a utopia and more a despotic dystopia, but Expelled from Paradise spends a little time to take us further on this journey.

Perhaps one of the worst things that can happen to a world which is completely virtual is that it gets hacked (or it votes in Teresa May as its leader - both are equally bad). Frontier Setter is the name of the hacker and they offer a way for the denizens of DEVA to "escape" and explore the universe. Sound too good to be true? Who actually knows? But it’s up to Angela Balzak, security agent, to go find out. Armed with a flesh and blood body, aged roughly 16 due to the rushed cloning process, Angela is tasked by DEVA to hunt Frontier Setter on the desolate post-apocalyptic Earth.

When humanity fled the Earth following climate change, not everyone was so fortunate as to be converted into a virtual body up in orbit. Most of the population were left on the planet, living in small settlements in a “wild west” kind of environment, if the Wild West was infested with 10 metre long swarms of carnivorous centipedes, that is. Angela meets up with Dingo, her local guide after crashing down in her super mecha. Lucky for her, Dingo has brought a whole stampede of centipedes to her vicinity. Cue an explosive introduction using the power of a super-charged mecha which she then has to leave behind, because if Frontier Setter can hack into a space station, what is stopping him from killing everyone with her mecha?

Cue an adventure across the face of the ruined Earth with the naive Angela and her all-knowing smart-arse partner Dingo, where Angela is taught the ways of this strange backwards land in her hunt to find, and potentially eliminate, Frontier Setter.

Expelled from Paradise feels like it takes some cues from quite a few science fiction themes to try and answer the question of what would happen if humanity continued along its technological path and evolved to post-corporeal status. It turns out, at least in this example, if you have your society based on a pure meritocracy where those with talent and skills get all the resources (very similar to the Post-Humans in Peter F Hamilton’s Commonwealth series) then you build a society which is very unequal and yet is very easy to control by the powerful few. Sound familiar? But in this universe, humanity finds itself challenged by its own creation: an AI. Would an AI become more human than a "virtual reality" humanity? Is our own human soul actually lost when we move from our bodies to virtual entities?

I found Expelled from Paradise fascinating and highly satisfying. The pacing is excellent and, although the feature turns into a bit of a romance as Angela is acquainted with life on Earth through the eyes of Dingo, the battle for survival and the conflict between the Earth, Frontier Setter and DEVA is quite spectacular. I didn’t expect orbital heists, massive mecha battles and huge guns to feature, but by heck they do. Very satisfying, though the highlight was actually Angela’s first fight against the mass of centipedes.

I watched the English dub, and although I found Angela’s voice to be rather grating at times, the production and scripting was actually rather enjoyable, except for some of the jokes at Angela’s expense. Thanks to the high quality of the all-CGI presentation and the Blu-ray transfer, the feature looks beautiful on Blu-ray. It was all very pretty.

All in all, Expelled from Paradise is an excellent taste of a possible future, and if anything, it should not be expelled from any anime collection.

Japanese and English 5.1 audio with English subtitles. The sole extra here consist of a "Making of Expelled from Paradise" feature.

9
A beautiful view of our dystopian post-corporeal future.