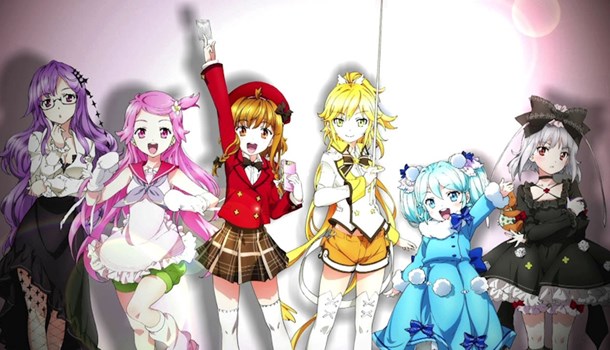 How often have you seen something in anime that you’d kill to have in real life? Be honest now, everyone has something whether it’s some 3D manoeuvre gear, an afro that can hide anything or, like several of our writers, a real-life catgirl. Personally I’ve always had a soft spot for the robots. Not the huge giant mechs (though I’d not turn down the chance to smash a few things in my personal Gundam...), but rather the smaller battling toys as seen in shows like Angelic Layer, Hoi-Hoi-san or last year’s Busou Shinki. Now with Fantasista Doll I have yet another show to make me want to throw my money at something I can’t buy, as it combines everything this kind of show normally deals in, with elements of Pokémon and collectable card games (presumably because these things aren’t addictive enough on their own...)

Uzume is our leading lady for the series. She’s an ordinary high schooler – energetic, happy and a former champion of a card game that is not at all in any way supposed to be Magic: The Gathering. Despite this, she’s left the gaming scene behind despite heartfelt pleas from an old friend to have her join the school's card club. Unfortunately for her she’s about to be dragged into the game of her life after someone approaches her from behind on a crowded train and..... slips a device into her bag (what did you think they were going to do, you filthy people?) This device contains a set of gaming cards and five new allies called "Dolls". Now she’ll need to learn to work together with her new friends against other masters and dolls who are out to take her cards. Exactly why these cards are so important is currently unclear, though it likely has something to do with Raffelasia no Kimi, the mysterious and dapper stranger who’s hanging around.

At only three episodes into this kind of series, and with around half of each episode taken up with action scenes, it’s only to be expected that most of the characters haven’t really had the chance to enjoy any time in the spotlight yet. As such, apart from our leading lady, only the now mandatory tsundere Sasara and the eager-to-please Madeleine have really had much focus. Even so, it’s clear that there’s good chemistry between the characters here and it makes for a fun show to watch, with some great comedy moments mixed in with the action, such as a ‘trap’ that takes the form of some buns too irresistible for the enemy to resist or equipping one of the dolls with a fish costume and trident to fight in the water.

Visually the series holds up pretty, well drawing from a pleasantly bright colour palette for its visuals and cute character designs. Even better, there are some really inventive visual touches such as the dolls being able to superimpose themselves on the word as seen by Uzume, essentially working like AR devices with them turning up on everything from a menu to the school sports field. The transformation/equipping scenes are done nicely too, taking inspiration from the armoury scene in the Matrix - though in this case rather than just racks of weapons everything is aboard trains (this is Japan after all). The only particularly odd aspect is that the Dolls often appear ‘unclothed’, but rather than being nude normally you get something that looks like it stepped out of a Sailor Moon transformation sequence with the body just painted white and with no real detail. One can’t help but wonder if the series was originally aimed at an older audience and then swiftly re-tooled when they realised how much money there’s likely to be in selling toys of the card devices.

Fantasista Doll is really good fun to watch and it’s nice to see a post-Madoka show in this vein that’s not all doom and gloom (Ahem, Day Break Illusion?) It’s also getting some pretty substantial support too, with no less than three ongoing manga in Japan all of which started within the last three months! Although it’s been slow to get the plot moving along you won’t go too far wrong with this series if it continues in its current vein, and I really look forward to seeing where the series goes next when I'm not moping around since I can’t buy a box with Sasara in it of my own...

You can currently watch Fantasista Doll in streaming form on Crunchyroll.

8
Fresh and fun, though you'll be left wanting more... much more!